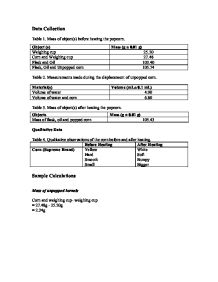 Unpopped kernels 2.34 Popped kernels 2.03 Table 6. Volume of popcorn, mass and moles of water lost, percentage of water in kernels, and pressure of steam inside kernel at time of pop Volume of popcorn (mL� 0.0001 mL) Mass of water lost (g � 0.02 g) Moles of water lost (mol � 0.003 mol) Percent of water in kernels (% � 0.4 %) Pressure of steam inside kernel at time of pop (atm � 27.60 atm) 0.0019 0.31 0.017 13.2 365.82 Conclusion and Evaluation Conclusion Popping popcorn requires the heating the corn until the pressure inside the kernel is greater than the pressure outside to cause the outer layer of the corn to burst and turning it inside out and release the moisture inside. The percentage of the water lost was calculated to 13.2% � 0.4% . The pressure inside the kernel at the time of pop was calculated using the ideal gas law which states that when particles that occupy the same volume under a constant temperature, any changes in volume is inversely proportional to pressure changes 1. ...read more.

This would make the calculation of the pressure inaccurate since it depends the value of the temperature. Improvements Improvements that could be made to this experiment include allowing more time for the corn to dry after displacing the kernels so there would not be excess moisture to alter the mass of water lost. The use of a curved sponge to clean and dry the inside of a Erlenmeyer flask would eliminate the chance of moisture remaining inside that could causes the mass of water lost to increases. Also, choosing kernels of similar sizes would improve the chance of the corn having uniform pressure inside the kernel at the time of pop and in turn improve the accuracy of the calculation of the pressure inside the kernel. More trials of this experiment could have been done to improve the accuracy of the results. Perhaps, calculating the atmospheric pressure and comparing that with the pressure inside the corn would help with a greater understand of the amount of pressure inside the corn if there was a comparison. ...read more.