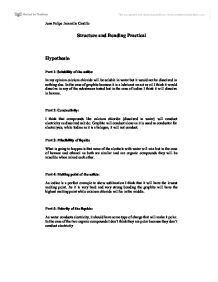 Structure and Bonding Practical Hypothesis: Part 1: Solubility of the solids: In my opinion calcium chloride will be soluble in water but it would not be dissolved in nothing else. In the case of graphite because it is a lubricant an act as oil I think it would dissolve in any of the substances tested but in the case of iodine I think it will dissolve in hexane. Part 2: Conductivity: I think that compounds like calcium chloride (dissolved in water) will conduct electricity as dissolved salt do. Graphite will conduct alone as it is used as conductor for electrolysis, while Iodine as it is a halogen, it will not conduct. Part 3: Miscibility of liquids What is going to happen is that none of the alcohols with water will mix but in the case of hexane and ethanol as both are similar and are organic compounds they will be miscible when mixed each other. Part 4: Melting point of the solids: As iodine is a perfect example to show sublimation I think that it will have the lowest melting point. As it is very hard and very strong bonding the graphite will have the highest melting point while calcium chloride will be in the middle. ...read more.

The charge is opposite to the charge in the ruler. Ethanol The water moved towards the charged ruler, showing that is has a polarity. The charge is opposite to the charge in the ruler. The movement in this case was less than the experienced by water showing that the intensity of polarity is less Hexane Nothing happened, showing that the substance has no polarity. Analysis: In first place we must say that the intramolecular forces have a major importance to determine the results in the different tests. Intramolecular forces like the ones found in compounds like Calcium Chloride and all other substances determine properties like bonding or boiling and melting point. Because of this we can find the difference in for example test 4, the intramolecular forces of ionic compounds are much stronger than the ones in bonding of diatomic molecules, however the intramolecular force found in bonds of covalent compounds of three dimensional arrays such as graphite, are stronger than the ones in some ionic compounds. This is the reason why Iodine has the lowest melting point and graphite has the highest even more than ionic compounds such as Calcium Chloride. So comparing the actual results with the results given in the hypothesis we can determine that the prediction was correct based on the reasons given above. ...read more.

Errors and Improvements: In my opinion we committed various errors specially when managing the substance. For example we made a lot of mistakes because we took a lot of substrate or in the other hand a lot of the solvent. Also we made mistakes when looking at the reactions because we didn't waited much time so we have may missed something important in the reaction. The procedure had mistakes itself for example in test 4 there was not a way to determine who had the highest melting point because we didn't have equipment that could reach those high temperatures. The same happened with test 2 because the charges were so little and the ammeter didn't showed small units so maybe here was a conductive substance we weren't able to see because of the equipment. Conclusion: Looking at the results of the five tests and to the analysis given of the mentioned results we can conclude that all of the substances in the practical have certain characteristics according to their molecular forces (intramolecular and intermolecular). Those characteristics will be listed on the table below Substance Type of bond Strength of molecular forces Polarity Calcium Chloride Ionic weak Polar Graphite Covalent strong Non-Polar Iodine Covalent Very weak Non-Polar Water Covalent Very weak Polar Ethanol Covalent Very weak Polar Hexane Covalent Very weak Non-Polar ?? ?? ?? ?? Juan Felipe Jaramillo Castillo ...read more.