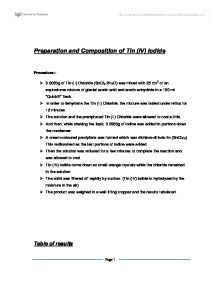 Preparation and Composition of Tin (IV) Iodide Procedure:- > 3.0020g of Tin (II) Chloride (SnCl2.2H2O) was mixed with 25 cm3 of an equivolume mixture of glacial acetic acid and acetic anhydride in a 100 ml "Quickfit" flask. > In order to dehydrate the Tin (II) Chloride, the mixture was boiled under reflux for 15 minutes. > The solution and the precipitated Tin (II) Chloride were allowed to cool a little. > And then, while shaking the flask, 3.2950g of iodine was added in portions down the condenser. > A cream-coloured precipitate was formed which was dichloro-di iodo tin (SnCl2I2). This redissolved as the last portions of iodine were added. > Then the solution was refluxed for a few minutes to complete the reaction and was allowed to cool. > Tin (IV) iodide came down as small orange crystals while the chloride remained in the solution. > The solid was filtered off rapidly by suction. ...read more.