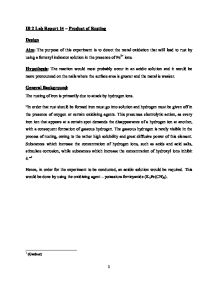 IB 2 Lab Report 14 - Product of Rusting Design Aim: The purpose of this experiment is to detect the metal oxidation that will lead to rust by using a ferroxyl indicator solution in the presence of Fe2+ ions. Hypothesis: The reaction would most probably occur in an acidic solution and it would be more pronounced on the nails where the surface area is greater and the metal is weaker. General Background: The rusting of iron is primarily due to attack by hydrogen ions. "In order that rust should be formed iron must go into solution and hydrogen must be given off in the presence of oxygen or certain oxidizing agents. This presumes electrolytic action, as every iron ion that appears at a certain spot demands the disappearance of a hydrogen ion at another, with a consequent formation of gaseous hydrogen. The gaseous hydrogen is rarely visible in the process of rusting, owing to the rather high solubility and great diffusive power of this element. Substances which increase the concentration of hydrogen ions, such as acids and acid salts, stimulate corrosion, while substances which increase the concentration of hydroxyl ions inhibit it."1 Hence, in order for the experiment to be conducted, an acidic solution would be required. This would be done by using the oxidizing agent - potassium ferricyanide (K3Fe(CN)6). ...read more.

NaOH of solution A Observation: solution turned pinkish - red Step 5: reaction of iron nails with solution A Observation: a deep blue outline of the nail of similar colour to the one in step 2 was obtained. Furthermore, it was noticed that the colour was darker on the outside part of the bent nail. Moreover, there were tiny pink spots in the shape (outline) but were not easily distinguishable. Data Processing Analysis of the various steps: Step 1: 15cm3 of 3% NaCl solution, 4 drops of 10% K3Fe(CN)6 solution and 2 drops of phenolphthalein indicator were combined to form a ferroxyl indicator solution. Rusting is a slow process when it undergoes naturally, hence in order to perform a quick study, it was necessary to stimulate the rusting to take place faster. Hence, K3Fe(CN)6 was used as an acidic oxidizing agent. The acidity of the solution would allow the dissociation of ions in the NaCl solution to give Na+, Cl-, H+ & OH-. This is important because in order for rusting to take place, hydrogen ions are needed so that Fe can go into solution and H2 gas is liberated. Furthermore, "the more ionized the solution is, the higher its electrical conductivity, and the more rapid damage to the underlying iron."2 Thus, a more acidic solution would lead to faster ionization of the NaCl solution. ...read more.

The second reason is that due to the bending, that part of the nail became weaker due to stress and hence it was easily corroded. This effect is known as pitting. On the other hand, the straight nail had no such darker spots in its outline. In addition to that, the slight pink spots observed on the paper napkin indicate that some parts of the nails contained more iron and hence were slightly more electropositive, thus attracting the OH- ions and giving the pinkish colour. The deep blue colour also indicates that the ions of iron were Fe2+. Conclusion and Evaluation From my experiment, I conclude that the product of rusting in this case was Fe2+ ions. Furthermore, I noticed that rusting occurs faster when the iron is in contact with an acidic salt solution. In addition to that, when parts of the object are weaker, they are corroded more easily and rapidly. Moreover, the amount of surface area exposed also affects the rate of rusting. Overall, the experiment performed was quite adequate and all the factors were taken into account. Although, the two nails could be kept for a longer time in the petri -dish to obtain more distinct results. In order to further study the action of rusting, the iron nails could be compared with steel nails and/or galvanized nails to see how fast or slow rusting occurs in each case. ...read more.