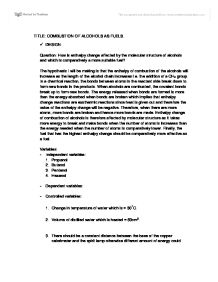 TITLE: COMBUSTION OF ALCOHOLS AS FUELS. * DESIGN Question: How is enthalpy change affected by the molecular structure of alcohols and which is comparatively a more suitable fuel? The hypothesis I will be making is that the enthalpy of combustion of the alcohols will increase as the length of the alcohol chain increases i.e. the addition of a CH2 group. In a chemical reaction, the bonds between atoms in the reactant side break down to form new bonds in the products. When alcohols are combusted, the covalent bonds break up to form new bonds. The energy released when bonds are formed is more than the energy absorbed when bonds are broken which implies that enthalpy change reactions are exothermic reactions since heat is given out and therefore the value of the enthalpy change will be negative. Therefore, when there are more atoms, more bonds are broken and hence more bonds are made. Enthalpy change of combustion of alcohols is therefore affected by molecular structure as it takes more energy to break and make bonds when the number of atoms is increases than the energy needed when the number of atoms is comparatively lower. Finally, the fuel that has the highest enthalpy change should be comparatively more effective as a fuel. Variables: - Independent variables: 1. Propanol 2. Butanol 3. Pentanol 4. Hexanol - Dependent variables: - Controlled variables: 1. ...read more.

Therefore, complete combustion does not take place. ==> The alcohol containers had varying sizes of wicks and amount of alcohol in them. Therefore, the flame was varying in size and was one of the sources of the error. ==> Some of the alcohol might be evaporating from the spirit lamp. ==> The thermometer might have touched the bottom of the calorimeter giving inaccurate results. ==> Another possibility could be lack of oxygen in the room which led to incomplete combustion as oxygen molecules would react with only one carbon molecule to from carbon monoxide, CO which is a poisonous gas since limited supply of oxygen causes some carbon atoms get released before they react with oxygen and hence might be present in the calorimeter in the form of soot. Improvements: ==> Use of a heat insulator such as heatproof mats to minimize heat loss and using an air tight around the spirit lamp to prevent any amount alcohol from evaporating. ==> Make sure the bob of the thermometer does not touch the extreme bottom of the calorimeter and the water is stirred throughout the experiment. ==> Make sure that a sufficient supply of oxygen is available; the experiment takes place in an area where there is free air circulation. ==> Similar spirit lamps are used having the same width of the wick so that the flame can reach the calorimeter regardless of the alcohol used. ==> Use of more advanced equipment. ?? ?? ?? ?? ...read more.