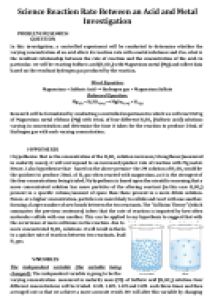 ﻿Science Reaction Rate Between an Acid and Metal Investigation PROBLEM/RESEARCH QUESTION In this investigation, a controlled experiment will be conducted to determine whether the varying concentration of an acid alters its reaction rate with a metal substance and if so, what is the resultant relationship between the rate of reaction and the concentration of the acid. In particular, we will be reacting Sulfuric acid (H2SO4) with Magnesium metal (Mg) and collect data based on the resultant hydrogen gas produced by the reaction. Word Equation: Magnesium + Sulfuric Acid ? Hydrogen gas + Magnesium Sulfate Balanced Equation: Mg (S) + H2SO4 (aq) ? MgSo4 (aq) + H2 (g) Research will be formulated by conducting a controlled experiment in which we will react 0.05g of Magnesium metal ribbons (Mg) with 10mL of four different H2SO4 (Sulfuric Acid) solutions varying in concentration and determine the time it takes for the reaction to produce 20mL of Hydrogen gas with each varying concentration. HYPOTHESIS I hypothesise that as the concentration of the H2SO4 solution increases/strengthens (measured in molarity mass), it will correspond to an increased/quicker rate of reaction with Mg metal. Hence, I also hypothesise that - based on the above premise- the 2M solution of H2SO4 would be the quickest to produce 20mL of H2 gas when reacted with magnesium, as it is the strongest of the four concentrations being trialed. My hypothesis is based upon the scientific reasoning that a more concentrated solution has more particles of the altering reactant (in this case H2SO4) present in a specific volume/amount of space than those present in a more dilute solution. Hence, at a higher concentration, particles are more likely to collide and react with one another, forming a larger number of new bonds between the two reactants. The ?Collision Theory? (which summaries the previous sentences) infers that the rate of reaction is impacted by how often molecules collide with one another. ...read more.

1. Measure out 10mL of the 0.5M, H2SO4 solution in second measuring cylinder and pour into large test tube. 1. (Start of trial) Place one strip of magnesium ribbon (0.05g) into large test tube and immediately cover top of tube with rubber stopper end of delivery tube. Ensure that it is firmly attached and air tight. As soon as reaction begins with H2SO4 solution already in test tube, start timing the rate of reaction using the stopwatch. 1. Measure and record the time it takes for the water level in the inverted measuring cylinder to decrease by 20mL. This will indicate that it has been replaced by 20mL of hydrogen gas. 1. Reset the experiment by rinsing the measuring cylinders and test tube with distilled water; refill the inverted measuring cylinder with 100mL of water and carefully place back into plastic container with delivery tube passing through it. 1. Measure another 10mL of 0.5M, H2SO4 solution in second measuring cylinder and pour into test tube. 1. Repeat steps 8 and 9 again, adding the 0.05g, Mg ribbon to the reaction in the test tube, cap of the test tube with the rubber stopper end of the delivery tube and time until 20mL of H2 gas has been produced in inverted measuring cylinder. 1. Rinse all equipment with distilled water once trial 2 is completed and measure out another 10mL of 0.5M, H2SO4 solution. Reset experiment like in step 10 and pour measured solution into clean test tube. 1. Begin trial 3 and repeat steps 8 and 10 again. If the previous two trials yielded similar results, trial 3 should also be of similar time length. If at the end of three trials, there is an anomaly within them, it may be required to complete a fourth trial to clean up data. 1. Repeat steps 7-14 again with the 1M, 1.5M and 2M H2SO4 solutions. ...read more.

we were interested in and hence were able to answer our research question in the affirmative that the concentration of an acid (in this Sulfuric acid) does effect its reaction of rate with magnesium metal, with the relationship being that an increase in concentration (molar mass) equates to an increased/quicker rate of reaction- evidenced by the time taken to produce 20mL of hydrogen gas. Our method was fairly clear, concise and allowed us collect our data in a fairly orderly way, doing so for most tests. It allowed us to complete the experiment with accuracy excluding the effects of the one, major problem (mentioned above) that were inevitable based on the way the experiment was conducted. Although our method and experimental plan were quite accurate, easy to understand and allowed us to achieve our target of determining a distinct and logical relationship, there are still many improvements that could be made to it to improve the validity of our results and further experiments could be carried out to extend this investigation. These include: * Completely eliminating human impact in the experiment by a valve of some sort to add the magnesium ribbons to the reaction in the test tube with the rubber stopper already firmly attached to the test tube. This will mean that the slight deviation in data is not experienced. * Using a larger sample size- (i.e. 8-10 different concentrations of H2SO4) so that the relationship gathered can be further strengthened and backed up by more evidence. * Investigate whether changing the concentration of H2SO4 has an impact on the time it takes for the reaction to reach equilibrium (the end of the reaction) and form a relationship from there. * Use different types of acids and metals with different properties to investigate if the rate of reaction is similar to that between Sulfuric acid and magnesium or it is quicker/slower. * Trialing different factors that affect the rate of reaction such as temperature or agitation and evaluating their influence compared to that of altering the concentration. ...read more.