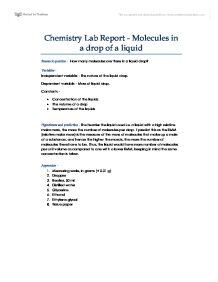 Research question - How many molecules are there in a liquid drop?

Chemistry Lab Report - Molecules in a drop of a liquid Research question - How many molecules are there in a liquid drop? Variables - Independent variable - The nature of the liquid drop. Dependent variable - Mass of liquid drop. Constants - * Concentration of the liquids * The volume of a drop * Temperature of the liquids Hypotheses and prediction - The heavier the liquid used i.e. a liquid with a high relative molar mass, the more the number of molecules per drop. I predict this as the RMM (relative molar mass) is the measure of the mass of molecules that make up a mole of a substance, and hence the higher the mass is, the more the number of molecules there have to be. Thus, the liquid would have more number of molecules per unit volume as compared to one with a lower RMM, keeping in mind the same concentration is taken. Apparatus - 1. Measuring scale, in grams (� 0.01 g) 2. Dropper 3. Beaker, 50 ml 4. Distilled water 5. Glycerine 6. Ethanol 7. Ethylene glycol 8. Tissue paper Methodology - 1. We collected the apparatus needed and measured the mass of the 50 ml beaker. We called it m1. 2. Using a dropper, we put 20 drops of water in the beaker. We measured the mass of the beaker + water, and called it m2. The mass of the 20 drops of water was found by subtracting m1 from m2. The answer was divided by 20 to find out the mass of one drop of water. 3. We repeated step 2, with water, using 40, 60, 80 and 100 drops. ...read more.

To make sure the dropper was well cleaned for each trial, liquids which dissolved the liquids being used could have been applied. Another way could be to find another dropper with the exactly same diameter as the one being used. This would decrease the errors by a great deal. 5. To ensure dust particles didn't fall into the liquids, a conical flask could be used. 6. After each trial, it should be made sure that the beaker is cleaned well and wiped well too, by tissue paper. In order to ensure that there is no extra liquid remaining, the mass of the beaker could be checked before adding the drops. 7. One set angle (of the dropper) should be used, for example the dropper could held at approximately 45� to the laboratory surface table for all trials. The pressure applied to the bulb should also be monitored. 8. When the dropper is full, the experiment could be carried out more slowly and the number of drops be carefully monitored. This would make sure that the size of the drops was not too large, and that the number of drops being added to the beaker were carefully monitored. 9. To decrease the number of air bubbles, the bottles which contained the four liquids could be shut for most of the time and not moved around much. It should also be made sure that the dropper was full with sufficient liquid so that there would be very less air bubbles, or none at all. 10. To avoid carry-on errors, each trial could be performed after cleaning the beaker with water and wiping it well with tissue, each time. These would be the improvements I would add to my experiment in case I perform it again. I would also like to use more, different liquids, in order to get a broader idea of the experiment. ...read more.