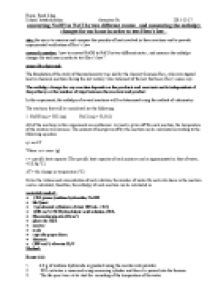 Research question: how to convert NaOH to NaCl by two different routes , and measure the enthalpy changes for each one in order to test Hesss law ?

ï»¿Name: Rand Ishaq School: katedralskolan chemistry IA 2011-12-17 converting NaOH to NaCl by two different routes , and measuring the enthalpy changes for each one in order to test Hess’s law . aim: the aim is to measure and compare the quantity of heat involved in three reactions and to provide experimental verification of Hess's Law research question: how to convert NaOH to NaCl by two different routes , and measure the enthalpy changes for each one in order to test Hess’s law ? general background: The foundation of the study of thermochemistry was laid by the chemist Germain Hess, who investigated heat in chemical reactions during the last century. One statement of the law that bears Hess's name says: The enthalpy change for any reaction depends on the products and reactants and is independent of the pathway or the number of steps between the reactant and product In this experiment, the enthalpy of several reactions will be determined using the method of calorimetry. The reactions that will be considered are the following: 1: NaOH (aq) + HCl (aq) NaCl (aq) + H2O (l) All of the reactions in this experiment are exothermic. As heat is given off for each reaction, the temperature of the mixture will increase. The amount of heat given off by the reaction can be calculated according to the following equation: q= mcΔT Where: m = mass (g) c = specific heat capacity (The specific heat capacity of each mixture can be approximated as that of water, 4.18 J/g ºC.) ...read more.

by swirling the solutions in both route (A) (B) that created a hole in the solution, in a result temperature readings could have been inaccurate because the thermometer would not encounter that much of the solution molecules and may be take the reading of the air temperature in that hole, and therefore the final calculations are incorrect. In addition: the NaOH was not grind well, so there were some pieces that were relatively large, so they took longer time to dissolve which might have changed the reaction results , an improvement of this error could be to use an electrical mortar or a coffee grinder so that all NaOH is grind evently One last point is that the thermos was washed immediately with water after each reaction , and then the next reaction was performed the thermos was not dried carefully. It is highly possible that some areas of the thermos were not washed down properly and some drops of water were left. This would have changed the outcome of the reaction as well as the enthalpy calculation at the end because it would give different temperature changes. So the error that encountered in this experiment is systematic errors more than random errors. The experiment was successful to the degree that the procedure was carried out correctly. Equipment problems and other unavoidable sources of error served to cause a large percent error for each part of the experiment. Assuming that the solution has the same density and specific heat capacity as water According to "Chemistry" by Raymond Chang (9th ed), it is -56.2 kj/mol p.243. http://www2.ucdsb.on.ca/tiss/stretton/chem2/enthlab2.htm 50.0 cm3 of Water added 50.0 cm3 of Water added âT % error = ( i found it to be -56kjmol-1) ...read more.