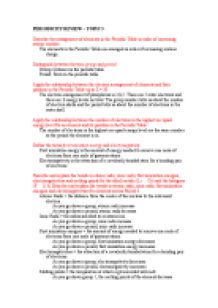 Revision Q's. Using the Periodic table to determine the characteristics of elements.

﻿PERIODICITY REVIEW ? TOPIC 3 Describe the arrangement of elements in the Periodic Table in order of increasing atomic number. The elements in the Periodic Table are arranged in order of increasing nuclear charge. Distinguish between the term group and period. Group: Column on the periodic table Period: Row on the periodic table Apply the relationship between the electron arrangement of elements and their position in the Periodic Table up to Z = 20 The electron arrangement of phosphorus is 2,8,5. There are 5 outer electrons and there are 3 energy levels on total. The group number tells us about the number of electron shells and the period tells us about the number of electrons in the outer shell. Apply the relationship between the number of electrons in the highest occupied energy level for an element and its position in the ...read more.

The more reactive halogen displaces the ions of the less reactive halogen. Discuss the changes in nature, from ionic to covalent and from basic to acidic, of the oxides in Period 3. Ionic compounds are generally formed between metal and non-metal elements, so the oxides of elements Na to Al have giant ionic structures Covalent compounds are formed between non-metals, so the oxides of P, S, and Cl have molecular covalent structures. Silicon, which is a metalloid, has a giant covalent structure. The oxides of Na and Mg are basic; the oxides of Al and Si are amphoteric; and the oxides of P, S, and Cl are acidic. A basic oxide reacts with an acid to form salt and water. A non-metallic oxide reacts with water to produce an acidic solution. ...read more.