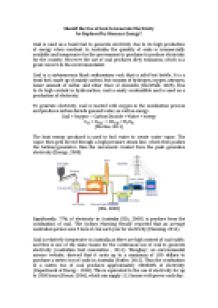 Should the Use of Coal to Generate Electricity be Replaced by Biomass Energy?

﻿Should the Use of Coal to Generate Electricity be Replaced by Biomass Energy? Coal is used as a fossil fuel to generate electricity due to its high production of energy when combust. In Australia, the quantity of coals is commercially available and inexpensive for the government to purchase to produce electricity for the country. However the use of coal produces dirty emissions, which is a great concern to the environmentalist. Coal is a carbonaceous black sedimentary rock that is solid but brittle. It is a fossil fuel, made up of mainly carbon, but consists of hydrogen, oxygen, nitrogen, lesser amount of sulfur, and other trace of elements (RockTalk, 2005). Due to its high content in hydrocarbon, coal is easily combustible and is used as a production of electricity. To generate electricity, coal is reacted with oxygen in the combustion process and produces carbon dioxide gas and water, as well as energy; Coal + Oxygen -> Carbon Dioxide + Water + energy C(s) + O2(g) -> CO2(g) + H2O(l) (Morton, 2011) The heat energy produced is used to boil water to create water vapor. The vapor then gets forced through a high-pressure steam line, which then pushes the turbine/generator; thus the movement created from the push generates electricity (Energy, 2008). ...read more.

This results in a carbon-negative energy source that removes carbon dioxide gas from the atmosphere rather than continuously emitting it to the atmosphere (BEST). Photosynthesis removes carbon dioxide and react it with water to produce glucose and oxygen. 6H2O(l) + 6CO2(g) + Sunlight -> C6H12O6 + 6O2(g) In which the produce of photosynthesis can be combust to produce energy; C6H12O6 + 6O2(g) -> 6H2O(l) + 6CO2(g) + Energy (Morton, 2011) With biomass resources the size of the Sydney Opera House, or a large barn, it can be used as a cleaner source to generate electricity to power 500,000 Australian homes (NEED, 2011). Though this would cost millions of dollars, but emission such as carbon dioxide and other by-products such as nitrogen oxide are reduced. Nonetheless, the idea of replacing coal with biomass energy to generate electricity is inconvenient at current state. Although biomass energy reduces the emission of fouled by-product such as carbon dioxide, it still continues to produce it. Also the coal is commercially viable and the cost of purchasing coal is rather cheaper than the cost of collecting biomass resource. A metric ton of coal at a cost of $180 can generate electricity for up to 111 homes, while a Sydney Opera House size of biomass resources would only generate electricity for only 500,000 homes and that would cost Australia millions of dollars to collect the resources. ...read more.