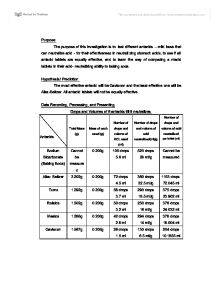 Testing antacids. The purpose of this investigation is to test different antacids mild base that can neutralize acid - for their effectiveness in neutralizing stomach acids, to see if all antacid tablets are equally effective, and to learn the way of

Maalox needed 14ml to neutralize one gram and 18.004ml to neutralize one tablet. At last, Gaviscon needed 6.5ml to neutralize one gram and 10.1855 ml to neutralize one tablet. Therefore, baking soda is more effective than other medication because it is very basic and this will speed up the process of neutralizing. Furthermore, the medication to prefer the least is Gaviscon which would not take much of effect. Procedure Antacids that were being tested are Sodium Bicarbonate (Baking Soda), Alka-Seltzer, Tums, Rolaids, Maalox, and Gaviscon. Their total masses are all different but the mass of amount of antacids were all 0.200g, the same. The amount of HCL should be on 0 on the scale of burette. 0.5 Molar HCL should go into the burette and 0.200g of an antacid that has been mixed with blue indicator and water should be in a flask. After all those materials are prepared, HCL in the burette should drop to the water and while it is dripping, the flask should be swirling around because if mixing by swirling is not completed, color changes will occur even though the color changes were not to be occurred when the mixing is completed. ...read more.

Tablet results include "Per gram" results multiplied by the total mass of the tablet. Because the total mass of the tablet is different from each other, it is impossible to compare each other. Therefore, regardless of the total mass of the tablet and the "per tablet" results, the answer for "per tablet" case would be alka-seltzer. Evaluation/ Improvements The plan is assessed to be satisfactory but the materials could be improved by having better equipment for measuring. No other skills were required and the procedure was generally acceptable. However, the quantity and quality of evidence were limited. The hypothesis was hard to predict because it was less likely to have an obvious answer with no evidence collected. The weaknesses of this lab are in the imprecise method of using burette by hand in the process of counting and measuring. Burette sometimes had given away a lot of hydrochloric acid without knowing how much has dripped because awareness of the timing of HCL coming out is unnoticeable. Therefore, there were less accuracy in counting drops, but the volume of acid neutralized was accurate. A bit of patience and cautiousness would have helped accurate counts. ?? ?? ?? ?? ...read more.