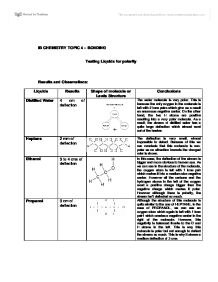 IB CHEMISTRY TOPIC 4 - BONDING Testing Liquids for polarity Results and Observations: Liquids Results Shape of molecule or Lewis Structure Conclusions Distilled Water 4 cm of deflection The water molecule is very polar. This is because the only oxygen in the molecule is left with 2 lone pairs which give as a result an enormous negative center. On the other hand, the two H atoms are positive resulting into a very polar molecule. As a result, the stream of distilled water has a quite large deflection which almost went out of the beaker. Heptane 2 mm of deflection The deflection is very small, almost impossible to detect. Because of this we can conclude that this molecule is non-polar as no attraction towards the charged ruler is shown. Ethanol 3 to 4 cms of deflection In this case, the deflection of the stream is bigger and more obvious to human eye. As we can see in the structure of the molecule, the oxygen atom is left with 1 lone pair which makes it into a medium size negative center. ...read more.

Another factor is the presence of H and C atoms in both sides of the O atoms which balance the forces of the lone pairs. In conclusion, although it's a polar molecule, due to the position of the O atoms and the H and C atoms, Ethyl Acetate didn't deflected that much the stream Ethane-1,2-diol 4 to 5 cms of deflection This molecule is clearly polar because of the great deflection that is caused by it. There are two O atoms each one with a lone pair which creates a very powerful negative center which makes the molecule to be polar. Increasing Order of Polarity Downwards HEPTANE PROPANONE PROPANOL ETHYL ACETATE ETHANOL DISTILLED WATER ETHANE-1,2-DIOL ETHANOIC ACID Camilo Lovera Trujillo Testing Liquids for polarity Evaluation / Improvements: Limitations / Errors Improvements * Bad smell of substances. * Many of the substances we were working with, had a very strong and bad odor which spread all the way over the class. Due to this smell, many of the students found difficult to concentrate and to be able to record correctly the deflection of the streams. ...read more.

From the observations and results we can also conclude that the C atoms reduce the polarity of the molecules as they created positive center in the molecule. However, it was thanks to the O atoms n most of the molecules that their polarity was considerably increased as they were left with lone pairs which helped to create negative center even bigger than the positive ones and due to this, deflect more the streams. On the other hand, there's a final conclusion to be made and is about the order of the polarity. Acids are the most polar substances just after the amides. In the case of Ethanoic Acid, we can see that it makes part of the most polar substances tested in this experiment as a result of the H bondings and the presence of the 2 atoms of O. Going down the list we will find: Alcohols, Ketones, Aldehydes, Amines, Esters, Ethers and Alkanes. Camilo Lovera Trujillo Testing Liquids for polarity Bibliography for Images of Lewis Structure and Molecular Structures: * http://www.chem.purdue.edu/gchelp/molecules/heptane.gif * http://www.uni-saarland.de/fak8/schneider/anichem/struktur/ethanol.gif * http://www.fisicanet.com.ar/quimica/organica/ap1/propanol01.gif * http://www2.open.ed.jp/data/37561/01/1221system/images/CH3COCH3.jpg * http://scienceaid.co.uk/chemistry/organic/images/ethanoicacid.jpg * http://www.steve.gb.com/images/molecules/alcohols/ethane-1,2-diol. ...read more.