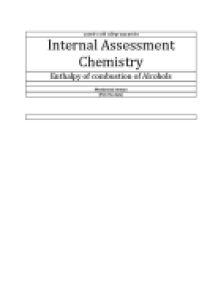 ﻿united world college maastricht Internal Assessment Chemistry Enthalpy of combustion of Alcohols Merdanovic Imman [Pick the date] ________________ Introduction The aim of this experiment is to examine the enthalpy of combustion of the first five alcohols and to see how does it change with the increasing chain length, in other words , with the changes in the number of carbon atoms . An alcohol is an organic compound in which the hydroxyl functional group (-OH) is bound to a carbon atom.The enthalpy of combustion () is the energy released as heat , when a compound undergoes complete combustion with oxygen under standard conditions. Carbon atoms in alcohols are linked together by a covalent bond. Every covalent bond has a 'bond energy', which it is the amount of energy needed to break the bond or the amount of energy given out as a bond is formed. However, it is important that the covalent bond is very strong and that it does not break easily, on contrary, it requires a lot of energy to be break . Alcohol's react with oxygen in the air to form water and carbon dioxide. The reaction that is involved in burning alcohols is exothermic because heat is given out. From this reason the reactant energy is higher than that of the product. The energy is given out when forming the bonds between the new water and carbon dioxide molecules. The amount of energy produced by such exothermic reactions can be calculated by using the formula Mass of the substance x rise in temp x SHC (specific heat capacity) , which is the number of joules required to heat one gram of water by 1°C. Alcohols that will be used in this experiment are ethanol,methanol,propanol,butanol and pentanol. After the experiment is finished, experimental and theoretical data will be compared and the conclusion will be drawn. Research question : How does the enthalpy of combustion of the first five alcohol change with the increasing chain length and why ? ...read more.

Flame was not concentrated at the same point throughout because of the movements. To prevent this, the setup should be in the glass box ( the isolated space ) , so that less heat is lost. At the end of each experiment soot (carbon) could be seen on the base of the copper can. This means that not all the energy from the alcohol heated the water. Also if there were a gradual build up of soot on the copper can, it would mean that it the thickness between the water and the flame was increasing. This could again have affected the results. Temperature measured might not have been accurate every time, as well as the mass weighted. Stopwatch was also a problem ,because it was hard to look at the time and take the measurements at the same time. To prevent errors, it would be good to work in pairs . Suggestions Taking more data would be advisable . Burette should be used as a more accurate measuring device. To help keep the flame where it should be , some sort of a foil or an isolated space should be costructed to keep the heat . Soot could have been wiped ,to reduce the possibility of this effecting the results. The burners ,of course, need to be of the same surface area. The workplace should not be bussy . A pipette could be used to make sure that all the liquid is collected. To provide a better evidence about the link between concentration and the enthalpy of alcohols the following could be done : Instead of investigating the affect of increasing the length of the chainthe position of the O-H group could be investigated. For the purpose of this alcohols such as Butan-2-ol and Pentan-2-ol and Hexan-2-ol should be used and compared to, Butan-1ol and Pentan-1-ol and Hexan-1-ol. The constants and variables could be changed , for example varying the distance between the spirit burner and copper can or volume of water. ...read more.