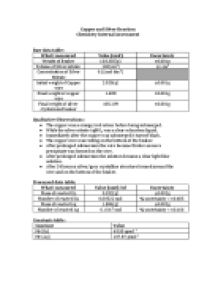 ï»¿Copper and Silver Reaction Chemistry Internal Assessment Raw data table: What I measured Value (unit) Uncertainty Weight of Beaker 103.335(g) ±0.001g Volume of Silver nitrate 100(cm3) ±1 cm3 Concentration of Silver Nitrate 0.1(mol dm-3) Initial weight of Copper wire 2.020(g) ±0.001g Final weight of copper wire 1.688 ±0.001g Final weight of silver crystals and beaker 105.139 ±0.001g Qualitative Observations: * The copper was a orange/red colour before being submerged. * While the silver nitrate AgNO3 was a clear colourless liquid. * Immediately after the copper was submerged it turned black. * The copper wire was resting on the bottom of the beaker. * After prolonged submersion the wire became thicker as more precipitate was formed on the wire. * After prolonged submersion the solution became a clear light blue solution. * After 24 hours a silver/grey crystalline structure formed around the wire and on the bottom of the beaker. Processed data table: What I measured Value (unit) 3sf Uncertainty Mass of reacted Cu 0.332(g) ...read more.

During the reaction the silver is reduced as it gains electrons and the copper is oxidized as it loses electrons. Cu (s) + 2AgNO3+ (aq) → Cu(NO3)2 (aq) + 2Ag (s) The balanced equation shows that two moles of silver nitrate react with one mole of copper to produce one mole of copper nitrate and two moles of silver. The molar ratio between Copper and Silver should be 1:2, which you can see by the coefficients in the balanced equation. Therefore my hypothesis is wrong as I have 1 more mole of silver than I should have, therefore my mass of silver was larger than expected or the moles of copper was lower than expected and my mass of copper was lower than expected. Yet our small precision error, or random error attributed to the precision of instruments is ±0.716%, which indicates that our range excludes the accepted value of 2. Therefore our must have some experimental error. This experimental error can be determined as a percentage through the following formula: % This experimental error is incredibly large. ...read more.

Another possibility as that during the decanting some crystals were removed from the beaker. This would have decreased the mass of silver, thus decreased the n(Ag) decreasing our ratio. As our ratio was larger than accepted value it is unlikely that this played a significant part in the experimental error of my experiment. To ensure that this would not effect a future experiment I would use a filtration system using filter paper instead of using a decanting method. Experimental error could also have been generated through having an incorrect copper measurement. An incorrect copper measurement could have been caused by copper flecks flaking off the wire into the solution and then being decanted out, though our method did try to remove this possibility by adding more silver nitrate it is still a possibility. This would have meant that we calculated less moles of copper than actually reacted. To ensure that this would not effect our results we should have left the extra silver nitrate for longer to allow it too react with any left over copper flecks. ...read more.