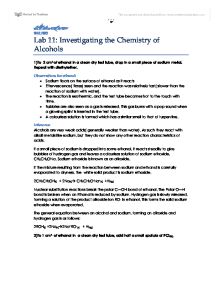 The chemistry of Alcohols

Lab 11: Investigating the Chemistry of Alcohols 1)To 2 cm3 of ethanol in a clean dry test tube, drop in a small piece of sodium metal. Repeat with diethylether. Observations for ethanol: * Sodium floats on the surface of ethanol as it reacts * Effervescence( fizzes) seen and the reaction was relatively fast( slower than the reaction of sodium with water). * The reaction is exothermic, and the test tube becomes hot to the touch with time. * Bubbles are also seen as a gas is released. This gas burns with a pop sound when a glowing splint is inserted in the test tube. * A colourless solution is formed which has a similar smell to that of turpentine. Inference: Alcohols are very weak acids( generally weaker than water). As such they react with alkali metals like sodium, but they do not show any other reaction characteristics of acids. If a small piece of sodium is dropped into some ethanol, it reacts steadily to give bubbles of hydrogen gas and leaves a colourless solution of sodium ethoxide, CH3CH2ONa. Sodium ethoxide is known as an alkoxide. If the mixture resulting from the reaction between sodium and ethanol is carefully evaporated to dryness, the white solid product is sodium ethoxide. ...read more.

If you used ethanol as a typical primary alcohol, you would produce the aldehyde ethanal, CH3CHO. The electron half equation for the reaction is shown below: A simplified version of the equation can be used to concentrate on what is exactly happening. To do that, oxygen from an oxidising agent is represented as [O]. That would produce the much simpler equation: The simple structures below illustrate the relationship between the ethanol and ethanal. In ethanol, the O-H group is attached to a carbon atom bearing two hydrogen atoms. Oxidation removes one of these hydrogen atoms together with the hydrogen atom in the O-H group. Nb: If oxidation occurs, the orange solution containing the dichromate(VI) ions is reduced to a green solution containing chromium(III) ions. Hence the solution turned from orange to green colour. The electron-half-equation for this reaction is 4II)Repeat with H+/ KMnO4- Observations: The solution changes colour from colourless to purple to red brown and on heating to dark brown solution. There is also formation of a brown precipitate. Inference: The acidified potassium manganate( VII) solution being a powerful oxidizing agent oxidizes the primary alcohols to acids hence the ethanol forms ethanoic acid. It is too powerful to form aldehydes and hence it forms carboxylic acids. ...read more.

The catalyst is usually concentrated sulphuric acid. The esterification reaction is both slow and reversible. The equation for the reaction between an acid RCOOH and an alcohol R'OH (where R and R' can be the same or different) is: Ethanoic acid reacts with ethanol in the presence of concentrated sulphuric acid as a catalyst to produce the ester, ethyl ethanoate. The reaction is slow and reversible. To reduce the chances of the reverse reaction happening, the ester is distilled off as soon as it is formed. In this reaction, it is the C(O)-H bond in the acid that breaks and not the C-OH bond in the alcohol. The reaction mechanism is confirmed by using the alcohol that is labeled with the isotope 18O. On separation of the reaction products it is found that it is the ester that contains the labeled oxygen and not the water. 8ii)Repeat with propan-2-ol Observations: * Effervescence is observed. * Gas produced turns blue litmus red * Sweet smelling product 8iii)Repeat with 2 methyl propan-2-ol. Observations: * Effervescence is observed. * Gas produced turns blue litmus red * Very sweet smelling product Combined inference(Explain the difference in smell if any): The explanations for the reactions of propan-2-ol and 2 methyl propan-2-ol are the same as those of the primary alcohol ethanol. The only difference is that the ester that is formed gives a sweeter smell as we move from ethanol to propan-2-ol and to 2 methyl propan-2-ol. ...read more.