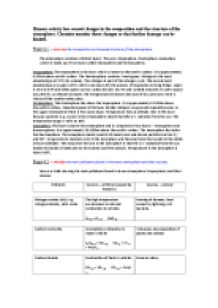 The chemistry of atmospheric and water pollution.

ï»¿Human activity has caused changes in the composition and the structure of the atmosphere. Chemists monitor these changes so that further damage can be limited. Point 4.1 – Describe the composition and layered structure of the atmosphere. The atmosphere contains 4 distinct layers. They are: troposphere, stratosphere, ionosphere (which is made up of two layers called mesosphere and thermosphere). Troposphere: The troposphere is the layer which is closest to the earth’s surface. It is approximately 0-15km above earth’s surface. The thermosphere contains 3 main gases. Nitrogen is the most abundant gas at 78% (by volume). The nitrogen is part of the nitrogen cycle. The second most abundant gas is oxygen (21%) which is necessary for the process of respiration in living things. Argon is next at 0.9% and other gases such as carbon dioxide, Ne, He and variable amounts of water vapour are present. As altitude increases, the temperature decreases (because of low pressure). Here is where all the weather takes place. Stratosphere: The stratosphere lies above the troposphere. It is approximately 15-50km above the earth’s surface. Important gases in this layer include nitrogen, oxygen and especially ozone. In the upper stratosphere there is the ozone layer. Temperature rises as altitude rises in this layer because particles (e.g. ozone) in the stratosphere absorb harmful U.V. radiation from the sun. The temperature range is -50ºC to 30ºC. Ionosphere: This layer is above the stratosphere and is comprised of two layers – mesosphere and thermosphere. It is approximately 50-150km above the earth’s surface. The mesosphere lies below the thermosphere. The ionosphere mainly consists of mainly ions and atomic particles such as O2+ and NO+. Oxygen atoms (radicals) exist in the ionosphere and free electrons that would not be stable at lower altitudes. The reason for the ions in the ionosphere is that the U.V. radiation from the sun breaks the bonds of molecules to form atoms and free radicals. ...read more.

To represent the atoms, there were different coloured balls (each representing a different atom) and there were rubber bonds which we attached between atoms to represent the covalent bonds. To make isomers, we pulled the balls apart and rearranged them to form a different structural formula. It is an isomer because it retains the same molecular formula but changed the structural formula. We drew the molecular formula, structural formula and 3D molecular model for each isomer. Point 4.14 ? Present information from secondary sources to identify alternative chemicals used to replace CFCs and evaluate the effectiveness of their use as a replacement for CFCs. Alternative chemicals used to replace CFCs are HCFCs (hydrochlorofluorocarbons) and HFCs (hydro fluorocarbons). CFCs had many useful applications: refrigerants in air-conditioners and refrigerators, a solvent in dry-cleaning and as a propellant in aerosol spray cans (insecticides, deodorants). They were used for these applications because they were inert and very stable. However the major problem of CFC is that they cause the depletion of ozone in the stratosphere. They do not react with substances in the troposphere so they move up into the stratosphere. They photo dissociate under UV light to produce chlorine free radicals which attack and destroy ozone molecules. HCFCs were proposed as alternative chemicals to replace CFC in the above applications. Example of HCFC is: CF3CHCl2 (HCFC-123). Advantages of HCFCs include: Unlike CFCs, HCFCs are less stable and thus are broken down in the troposphere. They contain relatively reactive C-H bonds which are easily broken up by reactive radicals and atoms to form carbon dioxide, water and hydrogen halide. This nullifies the problem of it attacking ozone molecules in the stratosphere. HCFCs have a much lower ODP (ozone depleting potential) than CFCs which basically means that there is less chance of the destruction of ozone caused by HCFCs. For example the CFC, trichlorofluoromethane (CFC-11) has an ODP of 1.0 whereas the HCFC, HCFC-123, has an ODP of only 0.05. ...read more.

This intensity of blue colour is measured by a colorimeter and compared to a series of standards to determine the concentration. Add lead (II) nitrate to form white precipitate. Point 5.7 ? Gather, process and present information on the features of the local town water supply in terms of: catchment area, possible sources of contamination in this catchment, chemical tests available to determine levels and types of contaminants, physical and chemical processes used to purify water, chemical additives in the water and the reason for the presence of thee additives. Catchment area: Warragamba Catchment; has an area of around 9000km2 and extends from south of Goulburn, north to Lithgow, east to Mittagong and west to Crookwell. Sources of contamination Logging and land clearing activities ? releases ions into water via run offs. This results in higher levels of TDS and turbidity. Agriculture activities ? using excess fertilisers which are rich in phosphate and nitrate fertilisers can enter waterways via run offs causing eutrophication and algal blooms. This causes low levels of DO and high levels of BOD. Mining in local areas near the dam have caused leaching of ions e.g. calcium + carbonate ions from limestone and zinc + copper ions also released. Disposal of mining wastes directly into waterways. Industrial waste + sewage may release bacteria + variety of ions + organic matter. Decreases DO levels, increases BOD, increases turbidity and TDS of the waterway. Testing contaminants Heavy metal ions and other cations using AAS or sulfide test. Precipitation reactions + flame tests Colorimetric analysis (nitrates + phosphates) Water purification methods Large scale industrial treatment of water ? screening, flocculating, sedimentation, filtering, chlorination, fluoridation. Membrane filters Chemical additives Chlorine bubbled in water to produce hypochlorite which is used as a disinfectant in water killing microorganisms and bacteria such as E.Coli. Fluoride compounds (e.g. sodium fluoride) added to prevent tooth decay. A note of thanks to: Dot point Chemistry Spotlight Chemistry Conquering chemistry HSC Online Chemistry contexts 2 Macquarie revision guides: Chemistry Ahmad Shah Idil ...read more.