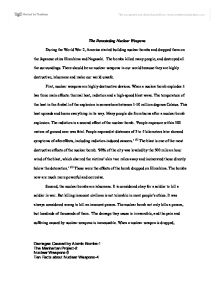 The Devastating Nuclear Weapons During the World War 2, America started building nuclear bombs and dropped them on the Japanese cities Hiroshima and Nagasaki. The bombs killed many people, and destroyed all the surroundings. There should be no nuclear weapons in our world because they are highly destructive, inhumane and make our world unsafe. First, nuclear weapons are highly destructive devices. When a nuclear bomb explodes it has three main effects: thermal heat, radiation and a high-speed blast wave. The temperature of the heat in the fireball of the explosion is somewhere between 1-10 million degrees Celsius. This heat spreads and burns everything in its way. ...read more.

But killing innocent civilians is not tolerable in most people's ethics. It was always considered wrong to kill an innocent person. The nuclear bomb not only kills a person, but hundreds of thousands of them. 'The damage they cause is irreversible, and the pain and suffering caused by nuclear weapons is inexcusable. When a nuclear weapon is dropped, everything is destroyed, and the radiation left over makes the place uninhabitable'(3). It is atrocious to use an atomic weapon on any populated area. Third, nuclear weapons make our world unsafe. Shortly after the first atomic bomb was built and used, the Soviets started making their own. 'The American atomic weapon monopoly was short-lived...Ultimately, the two worlds (US and the former USSR) ...read more.

Many scientists, as shown in the movie, at the end of the project were against the use of the bomb on Japan, just like I am today. In conclusion, nuclear bombs are not good to have. They are very destructive weapons that destroy everything from people to cities, they are inhumane because they kill innocent people who don't want war and don't deserve to be killed, and they make our world not a safe place to be in because of what they can do and the quantity. The UN should do something about the nuclear weapons to eliminate them. ?? ?? ?? ?? Damages Caused by Atomic Bombs-1 The Manhattan Project-2 Nuclear Weapons-3 Ten Facts about Nuclear Weapons-4 ...read more.