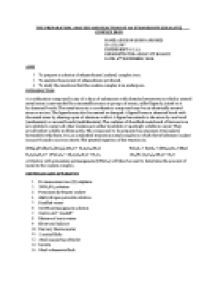 THE PREPARATION, ANALYSIS AND REACTIONS OF AN ETHANEDIOTE (OXALATE) COMPLEX IRON

﻿THE PREPARATION, ANALYSIS AND REACTIONS OF AN ETHANEDIOTE (OXALATE) COMPLEX IRON NAME: ADDISON JOSHUA HUGHES ID: 1511907 EXPERIMENT: I.2.1.1. DEMONSTRATOR: ADOLF OTI BOAKYE DATE: 6TH NOVEMBER, 2008. AIMS 1. To prepare a solution of ethanedioate (oxalate) complex iron. 2. To analyze the amount of ethanedioate produced. 3. To study the reactions that the oxalate complex iron undergoes. INTRODUCTION A coordination compound is any of a class of substances with chemical structures in which a central metal atom is surrounded by nonmetallic atoms or groups of atoms, called ligands, joined to it by chemical bonds. The metal atom in a coordination compound may be an electrically neutral atom or an ion. The ligands may also be neutral or charged. A ligand forms a chemical bond with the metal atom by sharing a pair of electrons with it. A ligand can attach to the atom by one bond (unidentate) or several bonds (multidentate). The oxalates of the alkali metals and of ferrous iron are soluble in water; all other oxalates are either insoluble or sparingly soluble in water. ...read more.

The reaction that took place was Fe(NH4)2(SO4)2· 6H2O + H2C2O4 = FeC2O4(s) + H2SO4 + (NH4)2SO4 + 6H2O(l) The supernatant liquid was poured off and the precipitate washed with hot water. The precipitate formed was FeC2O4.2H2O. 7.5g of potassium hydrogen oxalate in 20ml of water was heated. The potassium hydrogen oxalate was insoluble in water. The solution was cooled to 40oC and then 20ml of 6% hydrogen peroxide was added in drops, the solution being stirred continuously. The yellow precipitate of iron (II) oxalate was insoluble. The solution however changed to green containing green precipitate upon the addition of H2O2 with effervescence. H2O2 reacted with the iron (III) formed according to the reaction Fe3+ + 3OH- = Fe(OH)3(s) The potassium hydrogen oxalate reacts with the Fe(OH)3(s) formed to form the complex trihydrate according to the equation 3K2C2O4 + 2Fe(OH)3(s) +3H2C2O4 = 2K3[Fe(C2O4)3]· 3H2O + 3H2O The mixture now containing iron (III) hydroxide was heated to boil and then 2.5g of oxalic acid AnalaR was added and the mixture stirred continuously. ...read more.

sulphate. However it slightly oxidizes the iron (II) content of the complex. The addition of oxalic acid dihydrate to the Fe(NH4)2(SO4)2· 6H2O/H2SO4 solution yielded a yellow solution duet to the formation of iron (II) oxalate. Further addition of H2O2 aided the formation of the complex. The addition of ethanol was to precipitate any of the formed complex present in the green solution because the complex is less soluble in alcohol than in water. The permanganate titration oxidized the iron (II) to iron (III) this caused the change in colour of the solution. PRECAUTION 1. The solution was kept in the dark because in solution the ferrioxalate complex is decomposed by light. 2. Besides the formation of FeC2O4(s), the peroxide also reacts with the iron (III) formed to produce Fe(OH)3, the excess 10% oxalic acid dissolves Fe(OH)3 to form the complex. 3. Severe bumping can occur especially during the oxidation reaction hence the need for the continuous stirring. CONCLUSION The mass of K3[Fe (C2O4)3*3H2O was found to be 0.59g out of the total 0.7g of the sample measured. This was a percentage of 84.3% of the sample. REFERENCE Wikipeida.org/potassium ferrioxalate Google.com/iron (II) complex Britannica Encyclopaedia Library, 2008 edition ...read more.