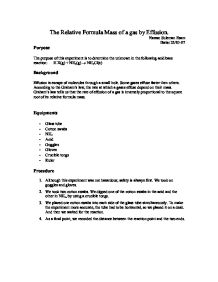 The Relative Formula Mass of a gas by Effusion

The Relative Formula Mass of a gas by Effusion. Name: Suleman Esam Date: 25/10-07 Purpose The purpose of this experiment is to determine the unknown in the following acid base reaction: H X(g) + NH3(g) ? NH4Cl(s) Background Effusion is escape of molecules through a small hole. Some gases effuse faster then others. According to the Graham's law, the rate at which a gases effuse depend on their mass. Graham's law tells us that the rate of effusion of a gas is inversely proportional to the square root of its relative formula mass. Equipments - Glass tube - Cotton swabs - NH3 - Acid - Goggles - Gloves - Crucible tongs - Ruler Procedure 1. ...read more.

Y= 38 �7.99% Conclusion The molar mass of the acid is 38. The acid contains one hydrogen atom, so the molar mass of the X is 37. Now there is no atom with molar mass of 37, so the two closest atoms to this molar mass are Cl and AR. When Cl binds with hydrogen, they form an acid, so X is Cl. With that known, we can complete the formula for the reaction. HCL(g) + NH??g??? NH4Cl(s) Errors - The two cotton swabs might not have been plugged inn simultaneously into the tube. - The solid that was made between the base and acid, had an area of approximately 2 cm and that increased the uncertainty. Improvements The experiment could have been more effective, if we had repeated the experiment several times to get a more precise result. ...read more.