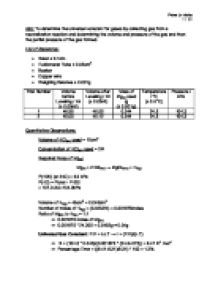 Conclusion: The literature value of the universal gas constant is 8.31 K-1 mol-1 and my value is 8.41 K-1 mol-1, which implies that the percentage error of my experimental gas constant is 1.2%. Under the conditions in which the experiment was performed, my results are acceptable because very little errors where encountered and the the percentage error is very small. Also due to the fact that the experiment was conducted under the same room temperature and pressure and the same mass of magnesium was used for each trial. A random error which I believe might have affected my result was the droplets noticed on the sides of eudiometer and this is an error because it's meant to just be the hydrogen gas present there, not the gas and the droplets. Evaluation: Errors, Observations during the Experiment Effect on the experiment / Explanation Concentration swirls observed during the reaction This is caused due ...read more.

An example of an impurity could be dust particles The magnesium ribbon gets smaller in size and looks cleaner This is because as the magnesium reacts with the acid, the metal turns into ions into the solution, thus the metal loses its mass Hydrochloric acid flowing out from underneath the eudiometer This is caused because hydrochloric acid is being displaced as the eudiometer is filled with hydrogen gas Incorrect readings taken This could lead to me having written down incorrect data which affected my final gas constant and led to my 1.2% error difference Improvement: * One major thing that I would do to improve the investigation would be to do more trials for the experiment, thus to reduce the random errors. * To clean the eudiometer very well, and ensure that there's as little as possible dirt and impurity present in the eudiometer. ...read more.