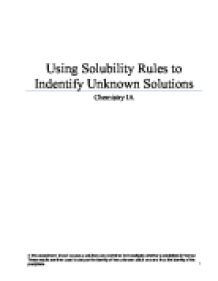 Using Solubility Rules to Indentify Unknown Solutions Chemistry IA In this experiment, known aqueous solutions are combined to investigate whether a precipitate id formed. These results are then used to deduce the identity of two unknown solutions and thus the identity of the precipitate. Table of Contents Focus Question: 2 Hypothesis: 2 Theory: 2 Variables: 3 Control Used for Comparison: 3 Apparatus and Material: 3 Safety Aspects: 4 Protocol and Protocol Diagram: 4 Procedure 4 Modifications to Original Design: 5 Data Collection and Processing: 5 Photograph of Lap Setup: 5 Qualitative Observations and Raw Data: 6 Data Processing 7 Overview: 7 Sample Calculations: 7 Presentation: 8 Conclusion and Evaluation 9 Conclusion and Justification: 9 Limitations to Experimental Design: 10 Suggestions for Improvements: 10 Appendix -1- Table of Ions and Polyatomic Ions 12 Bibliography 14 EXPERIMENTAL DESIGN Focus Question: Which pairs of 6 ionic combination solutions form precipitates and therefore aid in determining the two unknown solutions? Hypothesis: The two unknown solutions will be determined from chemical reaction observations obtained from pair ionic combinations resulting in precipitate formation. Theory: A solution is a homogeneous mixture that contains a solute dissolved in a solvent. A solution is made by dissolving the required amount of solute in a minimum of solvent. Once the solute has completely dissolved more solvent is added to make the solution up to the desired volume. If water is used as the solvent, the solution formed is called an aqueous solution. The term Molarity (M) is used to express the concentration of a solution, that is, how much solute is dissolved in a certain volume of solvent. A solution with a concentration (Molarity) of 0.1M is called a 0.1 molar solution. Concentration can be calculated by the formula:- Concentration (M) = moles* of solute Volume of solvent (Litres) *Where moles = mass of solute (g) Molar mass of the solute (g) The molar mass of a compound is the total mass of all of the elements in that compound. ...read more.

This would also have been as a result from possibly mixing up the labels between the test tubes, thus confusing which ionic solution was which while they were in the test tube rack. The probability that this would have occurred is particularly high, especially due to the fact that the labels associated to their designated micro test tube was not attached to the test tube but instead placed underneath it due to the fact that they were very small. This would therefore be placed as a random error. Cross contamination as a result of not washing the pipettes or micro test tubes properly would also have affected results gathered, which is most evident in the case of the barium chloride and sodium hydroxide reaction which should not have theoretically produced a precipitate. This, like mixing up the labels, would also have been a random error. Suggestions for Improvements: A further experiment can be conducted based on data gathered in this experiment. As the mass of the precipitates of the barium chloride and sodium hydroxide combinations were found, it may be interesting to compare these theoretical predictions to experimental results. Thus in this case, the precipitate of the ionic solution would be filtered with its mass then taken, subtracting the mass of the filter paper. The following improvements to the experiment conducted are displayed in the table below: Limitation identified Type of resultant error Suggested method of improvement Faulty equipment Systematic - Comparing pipette with another same size pipette. - Testing pipette works properly before using it to carry out investigation. Confusing labels of ionic solutions in test tubes Random - Using a permanent marker to make small marks on test tubes. - Using sticky tape to stick labels onto test tubes. Cross contamination Random - Having a minimum of six pipettes- one for each solution combination for part B - Carefully washing equipment before and after use. ...read more.