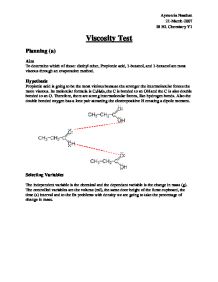 Viscosity Test Planning (a) Aim To determine which of these: diethyl ether, Propionic acid, 1-butanol, and 1-hexanol are most viscous through an evaporation method. Hypothesis Propionic acid is going to be the most vicious because the stronger the intermolecular forces the more viscous. Its molecular formula is C3H602, the C is bonded to an OH and the C is also double bonded to an O. Therefore, there are strong intermolecular forces, like hydrogen bonds. Also the double bonded oxygen has a lone pair attracting the electropositive H creating a dipole moment. Selecting Variables The independent variable is the chemical and the dependant variable is the change in mass (g). The controlled variables are the volume (ml), the same door height of the fume cupboard, the time (s) interval and to the fix problems with density we are going to take the percentage of change in mass. Planning (b) Method 1. Use a Pertri dish (to support the filter paper) 2. Tare the scales 3. Find and record the mass of the filter paper. 4. Drop the chemical onto the filter paper. ...read more.

Viscosity (cP) Diethyl Ether 0.224 at 25 �C 1-Butanol 3 at 25�C Propinoic Acid 10,000 1-Hexanol - The table above shows the literature value for three of the chemicals. And from this we can see that Propionic acid is the most vicious. There were few errors, while doing the experiment, one was the scales. It would not read a same number for more than 3s so we had to take the modal average for the masses. Also we used a stop watch and we might have noted the mass too early or too late. The pipette was a nuisance to use it was a pipette which measure 1 ml and it was hard to get exactly 1 ml but we managed. To improve this experiment we should use more of the chemical so that the time difference could be longer and we would get a better result for the change in mass. This method can determine which chemical is the most viscous but it cannot give us an exact number telling us which chemical is most viscous. Aysweria Naathan 21-March-2007 IB HL Chemistry Y1 ...read more.