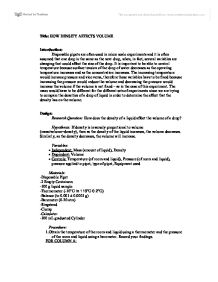 Volume of a Drop Lab

Title: HOW DENSITY AFFECTS VOLUME Intorduction: Disposable pipets are often used in micro scale experiments and it is often assumed that one drop is the same as the next drop, when, in fact, several variables are changing that could affect the size of the drop. It is important to be able to control temperature because surface tension of the drop of water decreases as the operating temperature increases and as the concentration increases. The increasing temperature would increase pressure and vice versa, therefore these variables have to be fixed because increasing the pressure would reduce the volume and decreasing the pressure would increase the volume if the volume is not fixed - as in the case of this experiment. The mass would have to be different for the different sets of experiments since we are trying to compare the densities of a drop of liquid in order to determine the effect that the density has on the volume. ...read more.

Weigh the mass of the empty container on the balance. Record its mass (to .001 g) 3. Pour about 2/3 of the 100 g liquid sample into the container. Record the combined mass of the liquid and container. Then get mass by difference to figure out the mass of the liquid sample. 4. Find the moles of liquid using molar mass 5. Transfer the sample into the disposable pipet and let it drop into a 100mL graduated cylinder 6. Using the Ideal Gas Law (PV=nRT), find the volume of this sample of liquid. P would be the pressure of the liquid, n would be the moles, R would be the constant of 0.0821mol(K)/L(atm), and T would be the temperature. FOR COLUMN B: 1. Record the temperature and pressure again to make sure these numbers are relatively the same as it was in the first set of procedures. 2. ...read more.

Instrumental limitations: A digital balance showing three decimal places can only weigh to within 0.0005 g by its very nature and even then only if it rounds the figures to those three places. Also, analogue devices such as thermometers or pipets and graduated cylinders often require the observer to interpolate between graduations on the scale. Some people will be better at this than others. Observing: For example, to measure the temperature of the liquid sample, you will dip a thermometer into it. This will inevitably cool the liquid slightly. The amount of cooling is unlikely to be a source of major error, but it is there nevertheless External Influences: The balance or other equipment may not be accurate and we also have to take in consider the impurity of the liquid sample. Sampling: Just these two sets of experimental procedures may not be enough to completely determine accurately the intended purpose for this experiment. Therefore, there may not be enough evidence to support the hypothesis. ...read more.