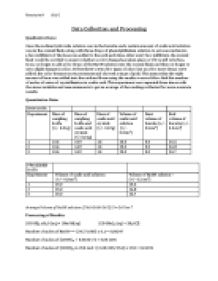 ﻿Rimsha Arif IB1-5 Data Collection and Processing Qualitative Data: Once the sodium hydroxide solution was in the burette and a certain amount of oxalic acid solution was in the conical flask, along with three drops of phenolphthalein solution to act as an indicator, a few milliliters of the base was added to the acid each time. After every few milliliters, the conical flask would be swirled to ensure whether a color change has taken place or if it is still colorless. Soon, we begin to add a few drops of the NaOH solution into the conical flask and then we began to see a slight change in color. At first there were a few signs of color, but as a few more drops were added, the color became more prominent and showed a tinge of pink. This meant that the right amount of base was added into the acid and from using the results we are able to find the number of moles of water of crystallization in oxalic acid. ...read more.

As we saw in the experiment, there were signs of the color pink in the flask but as we swirled the conical flask, the pink color disappeared, meaning we needed to add more sodium hydroxide solution. Repeating the experiment is another way to improve the accuracy. Due to time constraints we were only able to repeat the experiment three times, however we achieved very precise results therefore we can conclude that the experiment was quite accurate. However, improvements can be made by repeating the experiment about 5 times with the same variables and measurements and having more precise results with a difference of probably 0.05 cm³ than 0.1 cm³ as attained in the experiment. We can also consider the inaccuracies of the equipment used, for example the balance scale kept on giving a range of values for the mass of the weighing bottle, resulting in us choosing a value from that range. This causes an inaccuracy because the exact mass of oxalic acid crystals needed to make the solution may not have been used. ...read more.