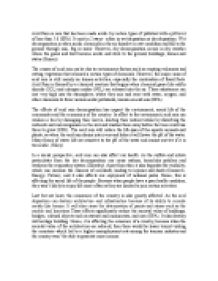 What are the Solutions for Acid Rain?

﻿Acid Rain is rain that has been made acidic by certain types of pollutant with a pH level of less than 5.6 (EPA). It exist in 2 ways - either in wet deposition or dry deposition. Wet decomposition is when acidic chemicals in the air dissolve in wet condition and fall to the ground through rain, fog or snow. However, dry decomposition occurs in dry weather where the gases and dust become acidic and stick to the ground, buildings, homes and statue (Briney). The causes of acid rain can be due to environment factors such as erupting volcanoes and rotting vegetation that released a certain types of chemicals. However, the major cause of acid rain is still mainly on human activities; especially the combustion of fossil fuels. Acid Rain is formed by a chemical reaction that begins when chemical gases like sulfur dioxide (SO2) and nitrogen oxides (NOx) are released into the air. These substances can rise very high into the atmosphere, where they mix and react with water, oxygen, and other chemicals to form various acidic pollutants, known as acid rain (EPA). The effects of acid rain decomposition has impact the environment, social life of the community and the economics of the country. In affect to the environment, acid rain can weaken a tree by damaging their leaves, limiting their nutrient intake by dissolving the nutrients and microorganism in the soil and washes them away before the trees could use them to grow (EPA). ...read more.

In contrast, nitrogen oxides are formed when any of the fossil fuels are burned. Apart from reducing the use of transportation by car-pooling, increase the use of public transportation and using the electricity and lights efficiently only when it?s needed. There are more advanced technology invented to prevent the problem with acid rain. Below are the solution to prevent acid rain: Scrubbers is a device used to removed harmful pollutants from exhaust gas before they are released to the atmosphere (wisegeek). The exhaust gas will pass through the scrubber where a spray mixture of limestone and water reacts with the SO2. At last, the clean gas or the water vapour will be released to the atmosphere. The reaction will enables the SO2 to be removed before it?s released into the atmosphere. As when SO2 combines with limestone, it will form calcium sulfate; also known as gypsum. Calcium sulfate can be recycled and reused in the manufacturing of wallboard and cement, and as a soil amendment in agricultural applications. The unused byproducts are properly disposed of in approved landfills. Figure 1: A diagram of how a scrubber works. Catalytic Converter is a device between the engine and the tailpipe. It uses catalyst to convert the 3 harmful compounds in a car exhaust to harmless compound. ...read more.