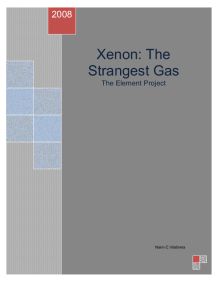 Xenon: The noble gas Xenon, as it may be found only in small amounts is a very unique element because of its physical properties.

The Noble Gas: Xenon Xenon, Xe, is one of the six noble gases. Xenon is located in the 18th group, or the noble gases, on the periodic table and is the 54th element. Sir William Ramsay was the lead chemist and Morris William Travers was his assistant in the detection and naming of Xenon in 1898. When Ramsay named Xenon in 1898, he based its name on xenos a Greek word meaning "the strange one". Xenon, like all the other noble gases, has a level of oxidation at zero. This property prevents it from easily forming compounds; however Xenon holds all its feasible electrons making it highly stable. Sir William Ramsay and Morris William Travers took a sample of the air and cooled it until all the elements within the air reached their melting points. ...read more.

It is odorless, has no color, and is tasteless like other monatomic molecules. Xenon's melting point is -111.80o C and has a boiling point of -108.13o C. Because of certain properties, it cannot react well with other compounds. Until scientists experimented on Xenon recently, along with other nobles gases, scientists thought that the noble gases were inert gases. Chemist Neil Bartlett discovered that Xenon could combine with Platinum hexafluoride to form Xenon hexafluoroplatinate, a yellowish orange solid compound. Because of Bartlett's discovery, many scientists have been interested in finding new compounds that Xenon could combine with. Some of these compounds include Xenon Trioxide, Xenon Hexafluoride, Xenon Tertafluoride, Xenon Oxytetrafluoride, and Xenon Difluoride. Scientists at Argonne National Laboratory reported that, if heated about 300- 400o C and at room temperature, Xenon reacts unequivocally with Fluoride. ...read more.

When the Xenon was ended the patients awoke after about two minutes. It may also be use in x-rays to produce the hydrocarbon more clearly by injecting it into the skull before taking an x-ray. In addition, when air is used for a skull x-ray the patient may awake with long term headaches but when Xenon is used the patient awakes with little to no discomfort. The stream of necessary liquids like blood and air in the brain and in the lungs can be tracked and studied using the radioactive isotopes of Xenon. The noble gas Xenon, as it may be found only in small amounts is a very unique element because of its physical properties. Many scientists today continue to study it because there is so much more to learn about it. Xenon is a very useful element to us today although it may be a very STRANGE element. ...read more.