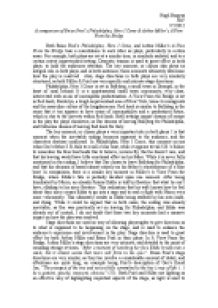 A comparison of Brian Friels Philadelphia, Here I Come &amp; Arthur Millers A View From the Bridge

﻿Hugh Burgess 5RY 7/5/2012 A comparison of Brian Friel?s Philadelphia, Here I Come & Arthur Miller?s A View From the Bridge Both Brian Friel?s Philadelphia, Here I Come, and Arthur Miller?s A View From the Bridge bear a resemblance to each other as plays, particularly in certain areas. For example, both plays are set at a similar time, in similarly isolated, and to a certain extent impoverished setting. Dramatic tension is used to great effect in both plays, to hold the audiences attention. The key moment, or climax also plays an integral role in both plays, and in both instances, these moments ultimately determine how the play is resolved. Also, stage directions in both plays are very similarly structured, as both Miller & Friel use very specific and intricate stage directions. Philadelphia, Here I Come is set in Ballybeg, a small town in Donegal, in the heart of rural Ireland. ...read more.

While it is never fully mentioned in the ending, I believe that Gar choses to leave Ballybeg for Philadelphia, and that his decision is based almost entirely on his father?s remembrance of a blue boat. In comparison, there is a similar key moment in Miller?s A View From the Bridge, where Eddie?s fate is partially decided upon one moment. After being humiliated by Marco, an already furious Eddie is told by Beatrice that what he can?t have, alluding to his niece Beatrice. This realization that his wife knows how he feel about their niece causes Eddie to go into a rage and to seek a fight with Marco even more vehemently. This ultimately results in Eddie being stabbed by his own knife, and dying. While it could be argued that in both cases, the ending was already inevitable, as Gar was practically set on leaving for Philadelphia, and Eddie was already out of control, I do not doubt that these two key moments had a massive impact on how the play was resolved. ...read more.

he is patient, gauche, innocent, obvious? (55). Both Friel and Miller use lighting as an effective way of highlighting important aspects of the stage, as light is used to highlight the wall clock in Philadelphia, Here I Come, and the phone booth in A View From the Bridge. Friel?s Philadelphia, Here I Come, and Arthur Miller?s A View From the Bridge are similar in many aspects, as are Friel and Miller, as shown by the similarity in their stage directions, and to a certain extent writing styles. Comparisons can be easily be made between the settings of Ballybeg and Red hook, and the inclusion of turning points in both plays further supports their similarities. While there are obvious contrasts that could be made between the two plays such as the themes which differ greatly, there are certainly some very strong similarities between the two plays. ...read more.