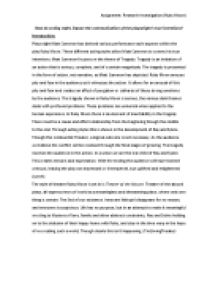 ﻿Assignment: Research Investigation (Ruby Moon) How do acting styles impact the communication of the playwright?s true intentions? Introduction: Playwright Matt Cameron has devised various performance style aspects within the play Ruby Moon. These different acting styles allow Matt Cameron to convey his true intentions. Matt Cameron focuses on the theme of Tragedy. Tragedy is an imitation of an action that is serious, complete, and of a certain magnitude. The tragedy is presented in the form of action, not narrative, as Matt Cameron has depicted. Ruby Moon arouses pity and fear in the audience as it witnesses the action. It allows for an arousal of this pity and fear and creates an affect of purgation or catharsis of these strong emotions by the audience. The tragedy shown in Ruby Moon is serious, the various dark themes deals with profound problems. These problems are universal when applied to the human experience. In Ruby Moon there is an element of inevitability in the tragedy. There must be a cause and effect relationship from the beginning though the middle to the end. Through acting styles this is shown in the development of Ray and Sylvie. Though this is Absurdist Theater, a logical outcome is not necessary. As the audience we believe the conflict will be resolved through the final stages of grieving. The tragedy involves the audience in the action. In a sense we are the lost child of Ray and Sylvie. ...read more.

This is because you have got those base characters of Ray and Sylvie and then the other characters that they become. You often see those other characters once and once only, so if you spend the first 30 seconds of a scene 'bleeding' into them, the audience is going to think, "What's going on?" You've got ten minutes with that person so you have to go 'bang' - this is who we are dealing with. With Dulcie, for instance, stooping into her physicality that helps to take a step into that character.? (Malthouse) Chemistry between the two actors is essential to convince the audience. Even if that chemistry is one of bleak depression. In any case the actors must have an established relationship. Actors should not be line driven when acting but focused on the exploration of grief. They should also provide a realistic and suitable reaction to the line prior to theirs. But depending on the director this is subject to change. For example, in a unlikely and doubtful case, one might reinforce the hopelessness of their relationship and situation, deeply exploring the extent of their grief in an absurdist approach to losing basic communication. In which case the alienation of the characters would work in an effective way. The performance of the actors should not remain at only one tone but at a heightened tension. So, the big challenge in rehearsal is the build trust among the actors to be conformable with the idea of not knowing the absolute truth about some of the characters and narrative presented in this play. ...read more.

In Ruby Moon it is only leading to the climax. Actors need to beware that in Ruby Moon you do not progress through the stages of grief in order nor do you ever recover. As shown in the climax, the two characters have reached a new level of grief, which does not exist. And that is insanity. Past guilt, pain, depression and onto insanity. As shown through acting styles this stage shows the breakdown of relationships and the barrier separating reality from fantasy is broken. The stages of grief are incorporated into transformational acting. When actors switch characters or as the scene progresses, the change of grief needs to be clearly shown to depict the true intentions of Matt Cameron. It is also necessary for the audience to acknowledge that the order is changed to the absurdist nature of the play, and that in the end there is no recovery. Conclusion: The impact of acting styles is very significant to communicate the playwright?s true intentions. Through transformational acting and elements that correlate with it portray Matt Cameron?s true intentions. Such as to show pressures of suburbia, climate of fear and paranoia, struggling conflict between Ray and Sylvie to find answers, dealing with grief and tragedy. Through acting styles in Ruby Moon it has successfully portrayed Matt Cameron?s true intentions. The questions left when the audience leaves says enough. Though this is subject to change due to skill level of different actors. Based on the text and the original play, his intentions have been successfully shown and have set a benchmark for all other plays to follow. ...read more.