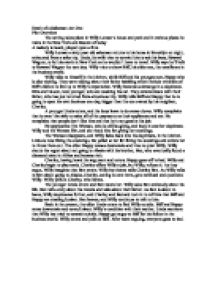 Death of a Salesman Act One

A melody is heard, played upon a flute

Willy Loman a sixty year old salesman returns to his home in Brooklyn on night, exhausted from a sales trip. Linda, his wife tries to convict him to ask his boss, Howard Wagner, to let him work in New York so he wouldn’t have to travel. Willy says he’ll talk to Howard Wagner the next day. Willy tries to show Biff, his older son, the excellence in the business world.

Willy talks to himself in the kitchen, while Biff and his youngest son, Happy who is also visiting. They were talking about their father babbling which include criticism of Biff’s failure to live up to Willy’s expectation. Willy becomes submerge in a daydream. Him and his son, now younger, who are washing his car. They communicate with their father, who has just returned from a business trip. Willy tells Biff and Happy that he is going to open his own business one day, bigger than the one owned by his neighbor, Charley.

A younger Linda enters, and the boys leave to do some chores. Willy complains that he won’t be able to make all of the payments on their appliances and car. He complains that people don’t like him and that he’s not good at his job.

He approaches The Woman, who is still laughing, and busy in another daydream. Willy and the Woman flirt, and she thank him for giving her stockings.

The Woman disappears, and Willy fades back into his daydream, in the kitchen. Linda is now fixing the stockings. He yelled at her for fixing the stockings and orders her to throw them out. The older Happy comes downstairs and tries to quiet Willy. Willy shouts his regret about not going to Alaska with his brother, Ben, who eventually found a diamond mine in Africa and became rich.

Charley, having heard the argument and enters. Happy goes off to bed. Willy and Charley begin to play cards. Charley offers Willy a job, but Willy, refuses it. As they argue, Willy imagines that Ben enters. Willy by chance calls Charley Ben. As Willy talks to Ben about going to Alaska, Charley, seeing no one there, gets confused and questions Willy. Willy yells at Charley, who leaves.

The younger Linda enters and Ben meets her. Willy asks Ben anxiously about his life. Ben tell a story about his travels and talks about their father. As Ben is about to leave, Willy daydreams further, and Charley and Bernard rush in to tell him that Biff and Happy are stealing lumber. Ben leaves; and Willy continues to talk to him.

Back in the present, the older Linda enters to find Willy outside. Biff and Happy come downstairs and consult about Willy’s condition with their mother. Linda mentions that Willy has tried to commit suicide. Happy get angry at Biff for his failure in the business world. Willy enters and yells at Biff. After more arguing, everyone goes to bed.