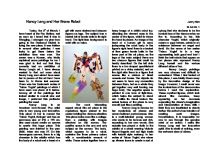 Today, the 9th of March, I have heard of the Pyo Gallery, and as soon as I heard that it was in Wangjing, I changed my plan from going to the Dashanzi District to trying the new place. It was hidden in several other galleries. I was lucky to get there before the exhibition time was over. The owner was a Korean, who kindly explained some paintings for me. I was glad to find out that they currently had an exhibition of Nancy Lang's art. I have always wanted to find out more about Nancy Lang ever since I have seen her in person at the art fare I have been to, in Korea last summer. There was her trademark series of 'Taboo Yogini' paintings of which I have seen one piece of it before. Among all of the paintings that looked similar in overall size and image, I preferred this particular painting the most. ...read more.

The positive space is the one and only subject on the canvas. The body, which appears to be a robot, contains the three primary colors with a considerable amount of white. These colors together form a fancy image of a child's robot toy, attracting the viewers' eyes to the center of the figure, which is where the head is placed. An image of the head of a human girl is used, juxtaposing the robot body. In the figure's right hand there is a basket of lime green tennis balls. In the lower part of the art piece, as the legs of the main subject there are two obscure figures that could be hardly described. On the left side there is a fan shaped quadrilateral printed on a shiny material, and on the right side there is a figure that seems like a mixture of blood vessels and bones. ...read more.

So the name of her series 'Taboo Yogini' is in a way representing both good and bad. I think the half-robots that appear on her pieces also represent Nancy Lang herself and the various different sides of her. Nancy Lang's paintings are very obscure and difficult to understand. When I first looked at this piece, I was totally blown away by the innovative design of the image. However, I could never see the ironical face of the democracies before I read the explanation. These mystical figures, which look almost like monsters, keep appearing on her canvases expanding the viewer's imagination and interpretation of them. Still, I think they are insufficient to clearly deliver the author's true intention of creating such images. Nevertheless, it is impossible for one to see through the genuine mind of an author. I really like Nancy Lang and her innovative spirit. She is afraid of nothing, even the awkward stare of others. ?? ?? ?? ?? Nancy Lang and Her Brave Robot Jenny Kim IB Art HL 1 ...read more.