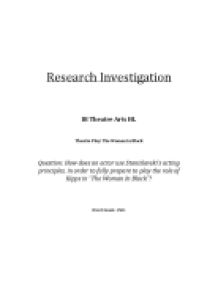 How does an actor use Stanislavskis acting principles, in order to fully prepare to play the role of Kipps in The Woman In Black?

Transfer-Encoding: chunked ﻿Research Investigation IB Theatre Arts HL Theatre Play: The Woman In Black Question: How does an actor use Stanislavski?s acting principles, in order to fully prepare to play the role of Kipps in ?The Woman In Black?? Word Count: 1501 ________________ Table of Contents Introduction: ???????????? Page 3 The Techniques: ?????????? Page 5 Conclusion: ????????????... Page 7 Bibliography???????????? Page 7 ________________ Introduction: Constantin Stanislavski was a Russian businessman that changed his career path to become a director due to his fondness of theatre and the arts. He founded the Moscow Arts Theatre with his partner Vladimir Nemirovich-Danchenko. Stanislavski initiated the Stanislavski System of acting, which was spread around the world by his students[1] and interpreted and developed by others like Lee Strasberg. The goal of Constantin Stanislavski?s system was to take an audience into a different world that will make everything they see or hear believable no matter what, unlike Brecht his method was to connect with the audience emotionally, physically and spiritually. "The method requires that an actor utilize, among other things, his emotional memory (i.e., his recall of past experiences and emotions). The actor?s entrance onto the stage is considered to be not a beginning of the action or of his life as the character but a continuation of the set of preceding circumstances. ...read more.

Touching upon his subconscious intuitively will help living the part of Kipps and no longer thinking as an actor but as Kipps. ?Since your subconscious is inaccessible to the mind, you can only consciously apply elements of our acting principles in order to lead the way toward the region of the subconscious, giving yourself completely until it takes you and immerses you in the role. The more you have of conscious creative moments in your role the greater chance you have of preparing the way for the blossoming of the valued.? (Acting the Truth: The Acting Principles of Constantin Stanislavski and Exercises. Page 10) To awaken the subconscious the actor should follow Stanislavski?s third method ?The magic IF? Stanislavski stated that the truth on stage is different from the truth in real life, which is an important statement especially when it comes to realism, since the actor is expected to create reality or truth on stage, although the actor shouldn?t believe in the truth of the action happening on stage but instead believe of the imaginative creation of them. The actor should start a conversation as Kipps with the other characters in the play but outside the lines and script, while doing that the actor should ask himself ?If I was Kipps what would I do/say?? They should convey the dialogue while looking into each other?s eyes because that will touch into the inner life and ...read more.

Conclusion: In conclusion, in order for the actor to prepare for the role of Kipps in ?The Woman in Black? the actor must make a clear link between the units and objectives of the play, a unit is a section of a scene that the actor divides up once he is discovered the units of action, and each unit contains an objective that the actor must pursue. To pursue the objectives the actor created he must follow Stanislavski?s techniques that were mentioned above, and that would result in self indulgent acting and not just communication with others on the stage. Touching upon ones subconscious could be extremely difficult, but once the actor reaches that point, follow the methods would be really easy to him, and that would lead to a believable performance and an easier delivery of the lines. But the actor should be motivated to do so, his mind and his feelings should be motivated enough to take upon a role that requires many emotions and a lot of climax that results in a change of the characters emotions. Concentration is key when it comes to Stanislavski?s techniques, and delivering them will require a lot of concentration beforehand and during the performance. But the actor shouldn?t block out the audience because Stanislavski felt that would contradict the point of theatre. Theatre is an art and blocking out its recipients would ruin the point of the performance because the audience are the co-creators of the performance. ...read more.