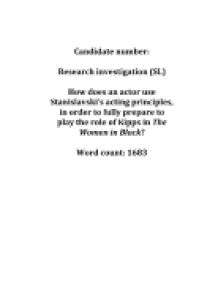 How does an actor use Stanislavskis acting principles, in order to fully prepare to play the role of Kipps in The Women in Black?

Transfer-Encoding: chunked ﻿image1.png ________________ How does an actor use Stanislavski?s acting principles, in order to fully prepare to play the role of Kipps in The Women in Black? The Women in Black The women in black is a story based on, Proud and solitary, Eel Marsh House surveys the windswept reaches of the salt marshes beyond Nine Lives Causeway. Arthur Kipps, a junior solicitor, is summoned to attend the funeral of Mrs Alice Drablow, the house?s sole inhabitant, unaware of the tragic secrets, which lie hidden behind the shuttered windows. It is not until he glimpses a wasted young woman dressed all in black at the funeral, that a creeping sense of unease begins to take hold. This feeling is deepened by the reluctance of the locals to talk of the woman in black ? and her terrible purpose. Years later, as an old man, he recounts his experiences to an actor in a desperate attempt to exorcise the ghosts of the past. The play unfolds around the conversations of these two characters as they act out the solicitor?s experiences on Eel Marsh all those years ago. (The Women In Black Story n.d.) Kipps?s Analysis Kipps is realistic. When he first sees the women in black, he tried to find a reasonable clarification: she's just some poor woman who has a terrible disease and has showed up at Mrs. ...read more.

4. Motivation: It's become a cliché actor's question -- What is my motivation? Yet, that is precisely what Stanislavsky expected his actors to consider. Why does the character say this? Why does the character move to this part of the stage? Why does she turn on the lamp light? Why does he take a gun out of the drawer? Some actions are obvious and easy to explain. Others can be mysterious. Maybe the playwright doesn't even know. (Or maybe the playwright was just lazy and needed someone to move a chair across the stage for the sake of convenience.) The actor must study the text thoroughly to determine the motivation behind a character's words and actions. (Bradford n.d.) 5. Emotional Memory: Stanislavsky didn't want his actors to simply create a duplicate of an emotion. He wanted his actors to actually feel the emotion. So, if a scene called for extreme grief, actors needed to put themselves in the mindset of the character's situation so that they genuinely experience the feelings of intense sadness. (The same goes for all the other emotions.) Sometimes, of course, the scene is so dramatic, the character so human, that these intense emotions come naturally to the actor. However, for actors not able to connect with the character's emotional state, Stanislavsky advised performers to reach into their personal memories and draw upon a comparable life experience. ...read more.

As in example, the monologue between kipps and actor on page 18, this monologue was motivated by the creepy reputation of Miss Drablow. Emotional Memory: This play is based on an emotional memory and the actor should use that. E.g. page 40 when Kipps is in the room with the dog spider, and its scary and the torch is missing. In this part the actor should link a memory of them, when they were a children in a dark room to what happened in this scene. This could help to have the terrifying emotion linked to this scene which could help the actor to shiver while acting to show that its scared. Objectives and super-objectives: Is what an actor wants and internally desires of that character, by releasing feelings and emotions. Kipps?s super-objective in this play is to relive what the ?actor? experienced. That?s by reliving the whole experience. Objectives for the actor to prepare this role could be trying to remove spider (the dog) from the moving sand. This method helps releasing the actor?s internal goal. Physical actions: The actor gets into character as he vocalizes each movement he does depending on pace, for e.g. the first part of the play when Kipps is part of the audience its action should be as realistic as possible, the actor could sit with his hand on its chin to look concentrated and part of the audience. ...read more.