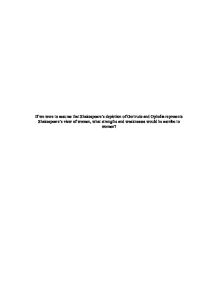 If we were to assume that Shakespeare's depiction of Gertrude and Ophelia represents Shakespeare's view of women, what strengths and weaknesses would he ascribe to women?

If we were to assume that Shakespeare's depiction of Gertrude and Ophelia represents Shakespeare's view of women, what strengths and weaknesses would he ascribe to women? Hamlet being one of Shakespeare's most famous plays has only two women characters, Ophelia and Gertrude. Gertrude, who was Hamlet's mother, and Ophelia who was Hamlet's love, played a very significant role in Hamlet, because they helped shape the characters. In the time period that Shakespeare lived in, women were not allowed onto the stage and they had very little to no rights. If it was assumed that Shakespeare's depiction of Gertrude and Ophelia represent his view on women then a reflection would be seen of the idea that women were as powerless as they were in Elizabethan times, however both Ophelia and Gertrude both have redeeming qualities as well numerous weaknesses. Ophelia, the daughter of Polonius and the sister to Laertes, is the most one-dimensional character in Hamlet. Ophelia is beautiful and gentle and is in love with Hamlet; however, due to her father and brother lecturing her on the impossibility of their love Ophelia withdraws from Hamlet. ...read more.

Ophelia is also very honest which is a redeeming quality, her only lie throughout the play is the one in which she lies to Hamlet about where her father is, "at home" (Act III scene i, 139) this could have been done out of fear on Ophelia's part but it was mostly done out of loyalty towards her father, which also show's that Ophelia is very loyal. If it were assumed that Ophelia did depict Shakespeare's view on women then it would seem that women were very gullible, very obedient, and very submissive. With very few redeeming qualities, honesty and loyalty to the wrong people, if Shakespeare truly did believe in the saying "frailty thy name is women" (Act I scene ii, 148) which was state by Hamlet then Ophelia fits perfectly. With no real mind of her own Ophelia just like Gertrude is subject to following the men in her lives, obeying there orders without any argument. However unlike Ophelia, Gertrude is more assertive, and there are times when she does rebel. Gertrude, the wife to both King Hamlet and King Claudius and mother to Hamlet, is one of the most difficult characters to understand in Hamlet. ...read more.

Even though Gertrude has many faults, like Ophelia, she also has a few redeeming qualities. Unlike Ophelia, Gertrude occasionally shows that she can disobey orders. This is seen only a few times in the book, especially when Claudius tells Gertrude not to drink the cup and she does saying, "I will, my lord, I pray you pardon me" (Act V scene ii, 295). These moments of rebellion show the reader that Gertrude is not always frail and she can act on her own accord. Gertrude's love for Hamlet is also another redeeming quality, and she show's it by lying to her Claudius to protect him. Gertrude tells Claudius that Hamlet is "mad as the sea and wind" (Act IV scene i, 7) to try and show Claudius that Hamlet truly is insane. Shakespeare depicts Gertrude as a stronger character than Ophelia, though she is still a frail woman, who has more faults than weaknesses. With all the textual evidence in the book it could be said that, in Hamlet Shakespeare attributes submissiveness to women, as well as ignorance and coldness to women as weaknesses, Shakespeare attributes honesty, loyalty and love to women as strengths. All things considered Shakespeare shows more seems to emphasize more on the faults of women in Hamlet. ...read more.