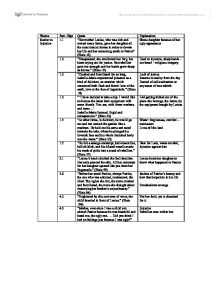 Justive vs. Injustice in Mad Shadows

Theme Part. Chpt Quote Explanation Justice vs. Injustice 1.1 "Her mother Louise, who was rich and owned many farms, gave her daughter all the most menial chores in order to devote her life and her remaining youth to Patrice" (Blais 16) Shuns daughter because of her ugly appearance 1.2 "Exasperated, she swallowed her fury, her heart crying out for justice. But rebellion gave her strength and her hands grew sharp as knives." (Blais 19) Used to injustice, sharp hands - cut bread - religious imagery. ...read more.

I would like to discuss the latest farm equipment with some friends. You see, with fewer workers and more...' Isabelle-Marie listened, frigid and unresponsive." (Blais 22) I-M getting kicked out of the place she belongs, the farms, by the equipment bought by Louise 1.3 "At other times, in delirium, he would go out and run around the garden like a madman. He held out his arms and raced towards the lake, where he plunged his feverish face and his whole famished body into the water." ...read more.

The uglier she felt, the more crushed and humiliated, the more she thought about destroying her brother's unjust beauty." (Blais 84) Jealous of Patrice's beauty and how that helps him in his life Foreshadows revenge 4.2 "Frightened by this new tone of voice, the child kneeled in front of Louise." (Blais 104) Not her fault, yet is chastised for it 4.2 "Mother, ever since I was a child you adored Patrice because he was beautiful and hated me, the ugly one. ... Did you think I had no feelings just because I was ugly?" Injustice Rebellion rose within her ...read more.