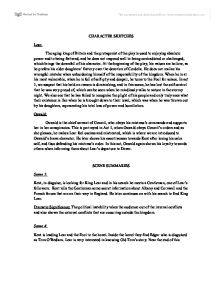 CHARACTER SKETCHES Lear: The aging king of Britain and the protagonist of the play is used to enjoying absolute power and to being flattered, and he does not respond well to being contradicted or challenged, which brings the downfall of his character. At the beginning of the play, his values are hollow, as he prefers his older daughters' flattery over the devotion of Cordelia. He does not realize his wrongful mistake when unburdening himself of the responsibility of the kingdom. When he is at his most vulnerable, when he is full of self-pity and despair, he turns to the Fool for solace. In act 1, we suspect that his hold on reason is diminishing, and in this scene, he has lost the self ...read more.

He later shows his assertiveness towards Kent after losing his calm self, and thus defending his mistress's order. In this act, Oswald again shows his loyalty towards others when informing them about Lear's departure to Dover. SCENE SUMMARIES Scene 1: Kent, in disguise, is looking for King Lear and in his search he meets a Gentleman, one of Lear's followers. Kent tells the Gentleman some secret information about Albany and Cornwall and the French forces that are on their way to England. He later continues on with his search to find King Lear. Dramatic Significance: The political instability takes the audience out of the internal conflicts and also shows the external conflicts that are occurring outside the kingdom. ...read more.

Some sympathy can be felt for Lear as his humane and logical side can be seen when he decides to pray and help the more needy instead of just praying for himself. Scene 5: Edmund betrays his father to Cornwall and gains further favor from the Duke, reason being that he wants revenge for being called the illegitimate son. Cornwall is now aware of the King of France's plans to aid King Lear, his wife's father. At the end of the scene, we note that Cornwall addresses Edmund as the Earl of Gloucester. Dramatic Significance: This scene presents the theme of betrayal of the traditional values and virtues, which will be replaced by chaos and the law of the jungle. Having lost his eyes, Gloucester is able to see and understand the truth. ...read more.