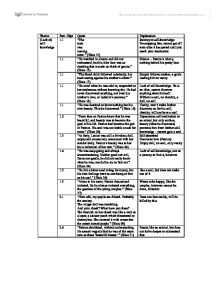 Lack of Self Knowledge in Mad Shadows

Theme Part. Chpt Quote Explanation (Lack of) self-knowledge 1.1 "The train was leaving town." (Blais 15) Journey to self-knowledge No stopping fate, cannot get off train after it has parted until you reach your destination 1.1 "He watched in silence and did not understand, but his idiot face was so dazzling that it made on think of genius." (Blais 15) Silence - Patrice's idiocy, nothing behind his pretty face 1.1 "The blond child followed indolently, his head resting against his mother's elbow." (Blais 17) Simply follows mother, a guide leading him to vanity 1.1 "He cried when he was told to, responded to her tenderness without knowing shy. He had never discovered anything, not even his mother's love, or Isabelle's jealousy." (Blais 18) Lack of self-knowledge. He is an idiot, cannot discover anything about himself. Without a soul, no identity, a doll, no self. 1.1 "He was destined to know nothing but his own beauty. This he discovered." (Blais 18) Vanity, won't make further discovery as for his self, identity, will not have a soul 1.2 "From then on Patrice knew that he was beautiful, and beauty was to become the goal of his life. ...read more.

Wants to be happy, like the couples, however cannot be done, imitation 2.1 "How odd, my pupils are dilated. Probably the anxiety. The vulgar doll was trembling. And your cheek? What have you there? The blemish on her cheek was like a welt on a leper, a sinister patch which threatened to destroy her. She covered it with cream but the cream turned purple." (Blais 60) Does not face reality, will be killed by this 2.4 "Patrice shuddered, without understanding. He sensed vaguely that he was of the same race as these 'beautiful beasts'." (Blais 71) Reacts like an animal, but does not delve deeper to understand that 2.6 "Lanz felt himself growing cold, he who had never thought of death nor of the death of the spirit, he whose gods were his clothes, his women, Louise's jewels, and a gold cane." (Blais 75) Knew nothing about himself even at the very end of his life 2.6 "Everything grew confused. His idiot's memory was like an empty box in which the mechanisms of remorse were out of order and which was no more resilient than the heart of a madman." ...read more.

(Blais 110) Cannot accept reality that he's ugly 4.6 "I will go home to my mother. I will look for my face in the lake. Perhaps my beautiful face is still there." (Blais 118) He has not attained self-knowledge on this journey in the asylum 4.8 " 'God in Heaven,' Louise prayed, 'have mercy!' But her mirror did not answer." (Blais 121) Thinks she is god-like (herself in mirror) Epilogue "My mother is waiting for me. She will open the door of her room and say, "But where were you, Patrice?" (Blais 123) Futile journey to self-knowledge, returns to start Epilogue "He disturbed the ashes as he walked. It was a world of ashes and broken mirrors." (Blais 123) Ruins, no mirrors (no Louise) to reflect his face Epilogue "Then, since he had nothing else in the world but the water, he plunged his head into the lake and sank after it, looking for the beautiful face." (Blais 123) Still searching for beautiful face in water Epilogue "In the blue of the sky which came after the blue of the water, the Beautiful Beast found his soul at last." (Blais 123) Finds soul too late, discovery of soul sends him to his death - ironic ...read more.