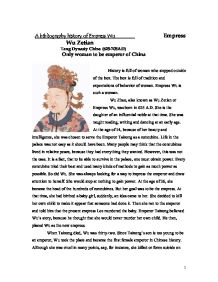 A bibliography history of Empress Wu Empress Wu Zetian Tang Dynasty China (625-705AD) Only woman to be emperor of China History is full of women who stepped outside of the box. The box is full of tradition and expectations of behavior of women. Empress Wu is such a woman. Wu Zhao, also known as Wu Zetian or Empress Wu, was born in 625 A.D. She is the daughter of an influential noble at that time. She was taught reading, writing and dancing at an early age. At the age of 14, because of her beauty and intelligence, she was chosen to serve the Emperor Taizong as a concubine. Life in the palace was not easy as it should have been. Many people may think that the concubines lived in relative peace, because they had everything they wanted. However, this was not the case. It is a fact, that to be able to survive in the palace, one must obtain power. Every concubine tried their best and used many kinds of methods to gain as much power as possible. So did Wu. She was always looking for a way to impress the emperor and draw attention to herself. She would stop at nothing to gain power. At the age of 26, she became the head of the hundreds of concubines. ...read more.

However, nobody ever knows the price I paid in the currency of loneliness and insult in order to be this type of woman. I know the words people use to describe me- cunning, power hungry and ruthless. To some I was an autocrat, ruthless in my desire to gain and keep power. To others I, as a women doing a "man's job", merely did what I had to do and acted no differently than most male emperors of our dynasty. Nobody ever knows that I was jailed for my beliefs. At the age of 14, I was called to serve the emperor and entered his palace as the fifth concubine. Life in the imperial court was not as it should have been. One would think that the concubines lived in the relative peace, because they had everything they wanted. However, this was definitely not the case. As I found, that to be able to survive in the palace, one must obtain power. All the things stuck in my mind at the time are power, power and power. In order to raise the title of empress, I even killed my daughter. The fact is, I made it. And after Emperor Taizong died, finally I became the Emperor at the age of 32. I am always thinking that, if I did not enter the palace, I might have a warm family already. ...read more.

The character suddenly stuck in mind is Empress Wu. She is the first and the only female emperor in Chinese history. To some she was an autocrat, ruthless in her desire to gain and keep power. To others she, as a woman doing a "man's job," merely did what she had to do and make great contributions to Tang Dynasty. Some speak highly on her while others do not like her at all. I will say that she has two sides in her character- positive and negative. In order to let the audience get a general picture about her, I have to show her both sides character in my performance. She is actually hero. She wasted her lifetime in pursuing earthly power and position, but she never feels happy. This reminds me about a fictional character called Hagar from the novel "The Stone Angel". Hagar displays pride in her chrematistics. But it is negative pride. The pride made her afraid of self-expression. She always pretends to be a strong person and she will not allow people to cross the wall that she builds up around her. The same thing applies to Empress Wu. Her pride jailed her in her own believes. She never feels free to express her really emotions. She has to hide her emotions deep in her heart. The pride also prevent from seeing the truth of a situation and from achieving happiness in life. The pride caused her a tragic life. 1 ...read more.