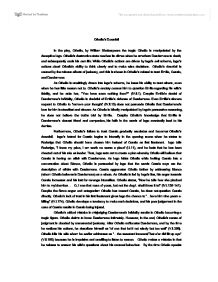 Othello's Downfall In the play, Othello, by William Shakespeare the tragic Othello is manipulated by the deceptive Iago. Othello's destructive state reaches its climax when he smothers Desdemona to death, and subsequently ends his own life. While Othello's actions are driven by Iago's evil scheme, Iago's actions cloud Othello's ability to think clearly and to make wise decisions. Othello's downfall is caused by the ruinous effects of jealousy, and this is shown in Othello's refusal to trust Emilia, Cassio, and Desdemona. As Othello is unwittingly drawn into Iago's scheme, he loses his ability to trust others, even when he has little reason not to. Othello's anxiety causes him to question Emilia regarding his wife's fidelity, and he asks her, "'You have seen nothing then?'" ...read more.

Thus, Iago sets out to create a plan whereby Othello will believe that Cassio is having an affair with Desdemona. As Iago hides Othello while inviting Cassio into a conversation about Bianca, Othello is persuaded by Iago that the words Cassio says are the description of affairs with Desdemona. Cassio aggravates Othello further by addressing Bianca (whom Othello believes is Desdemona) as a whore. As Othello is fed by Iago's lies, his anger towards Cassio increases and his lust for revenge intensifies. Othello states, "Now he tells how she plucked him to my/chamber... O, I see that nose of yours, but not the dog I. shall throw it to!" (IV.i.139-141). Despite the fierce anger and antagonism Othello has toward Cassio, he does not question Cassio directly. Othello's lack of trust in his first lieutenant gives Iago the chance to "...have him nine years a-killing" (IV.i.174). ...read more.

After his crime, he is told the truth about Iago's lies and deceitful acts. Appalled by his behaviour, Othello states, "I kiss'd thee ere I kill'd thee: no way but this,/Killing myself, to die upon a kiss" (V.ii.354-355) and commits suicide. Othello's jealousy becomes the catalyst for suicide which ends an otherwise loving relationship and industrious career. To sum up, Othello's jealous and impulsive nature influences his actions. Although Othello prides himself on being a stalwart fighter and of noble character, he nevertheless is morally weak, and knows little about true love. He accepts Iago's words as truth, and discounts Emilia, Cassio, and his own wife, Desdemona. Othello's pride stands in the way of reason, and he allows himself to be manipulated by a man whose goals are purely selfish. Othello's downfall is, however, ultimately himself, for he could have chosen reflection/rational detachment over impulsivity and therefore averted tragedy. ?? ?? ?? ?? ...read more.