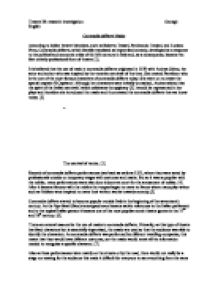 Research Investigation: commedia dell'arte masks. It is believed that the use of mask in commedia dell'atre originated in 1570 with Andrea Calmo, the actor and author who was inspired by the Venetian carnivals of the time.

Theatre IB: research investigation: Oonagh English Commedia dell'arte Masks According to italian theatre historians, such as Roberto Tessari, Ferdinando Taviani, and Luciano Pinto, Commedia dell'arte, which literally translated as improvised comedy, developed as a response to the political and economic crisis of the 16th century in Italy and, as a consequence, became the first entirely professional form of theatre [1]. It is believed that the use of mask in commedia dell'atre originated in 1570 with Andrea Calmo, the actor and author who was inspired by the venetian carnivals of the time. She created Pantaloon who is the one of the most famous characters of commedia dell'arte today. She went on to create the spanish captain 'Il Capitano'. Although her characters were initially unmasked, Andrea wished that the spirit of the Italian carnival ( which celebrates the epiphany [2] ) would be represented in her plays and therefore she introduced the masks and thus created the commedia dell'arte that we know today. ...read more.

They were like this so that the actor was able to project his voice and made certain noises that he could not do with a full mask. The masks were made to fit the face of a given actor because he or she would generally act out the same character for his/her entire career. Commedia dell'arte masks tend to have large, broad feature which are distinct to each character. For example on the character Zanni, the nose is very large. It is said that the larger the nose is, the stupider the Zanni represented tends to be. Zanni [2] Zanni [3] As I have said before, commedia dell'arte characters were based on 'tipo fisso' (a certain stereotype). Some of them have changed there name or personality over time for example Zanni, who is characterised as short of wit and always without money. Zanni has several masks that represent him which have changed over time with the fashion. ...read more.

Jaques Lecoq, was born in 1921 started off as a sports teacher and then moved on to acting with his partner, Gabreielle Cousin. He moved to Italy for eight years in 1948 where he discovered Commedia dell'arte. Together with the sculptor, Amleto Sartori, they developed the neutral mask. When Lecoq moved back to Paris he devoted the remainder of his life to teaching at his school. Jaques Lecoq [5] His school offers several courses that work on understanding and working with the body through the use of masks. His philosophy was that in order to become a good actor, you needed to use the Neutral masks to discover your body, movement, balance and space. He also believed that the typical half masks of commedia dell'arte, played an important role in improvisation and to work on character types therefore he integrated both into his courses [11]. Words 1000 (not including bibliography, notes under images nor titles ) Bibliography: [1] - http://en.wikipedia.org/wiki/Commedia_dell'arte [2] - http://www.religionfacts.com/christianity/holidays/mardi_gras.htm [3] - http://italian.about.com/library/weekly/aa110800a.htm [4] -http://www.tutu-inc.com/thesis/THESIS.htm [5] -http://www.therudemechanicaltheatre.co.uk/talkarchive.htm [6] -http://www.tutu-inc.com/thesis/THESIS.htm [7] - http://www.usq.edu.au/artsworx/schoolresources/androclesandthelion/commedia#Mask [8] - http://wiki.answers.com/Q/What_are_masks_used_for [9] - http://italian.about.com/library/weekly/aa110800a.htm [10] -http://www.delpiano.com/carnival/html [11] - http://www.ecole-jacqueslecoq. ...read more.