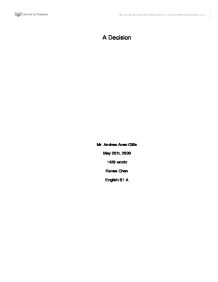 This was not where I wanted to be. This was nowhere close to where I wanted to be. Dirt and tree twigs stuck on my face and I could taste the rough bitterness of the ground. My head spun round giving my vision the earthquake effect. I didn’t even know where I was. Nothing went the way it should have. All I could see in front of me was a pitch black bag. My body shook back and forth. The only thing in my head was the sound of two grown men, running away. It rang around in my head like the bells of the church. I screamed.

I am George Kelly. I am the only remaining twin of my family. My mother is dead, killed by my father, a drunken maniac. He gets in bar fights all the time and ends up beating up anyone in his way. Just last week he beat the mayor’s daughter unconscious. She is in a coma now and no one knows when she might come out. The local police, all close friends of my dad, feel sorry for the man and usually left him off easy with a few days in jail. However, because of his reputation he cannot get a job so his only income is from the neighboring aristocrats, the Dixons. They always treat my father well and secretly hand him envelopes of money but they never look at me. They even try to keep their son, Logan, as far away from me as possible. They don’t succeed most of the time though.

Light poured in all around me. My shadow marked where I had been with small footprints of dry earth, crushed leaves and snapped branches. Trees were everywhere around me and light brown squirrels hurried about me, holding in their mouth the food they spent the day gathering for the long nights ahead of them. On the floor there was a colony of ants, working together as a family collecting food. My stomach growled as I tried to remember my last meal. I didn't want to. My foot blocked out the sun for this little family of ants as I prepared to mold their home into a flat sheet.

“So George how’s everything?” said Logan as he emerged from the bushes in front of me. We were deep in the forest far from where our parents were. He was dressed head to toe in a shiny white tuxedo, imperfect only by the bush scratches he had just put on them. I, on the other hand, was wearing an old sweater and pants handed down from my brother.

“Why do ya keep on wanting to talk to me?” I questioned, already knowing the answer.

“You know why. I care about ya and want to see how you are doing.” Then after a pause, he added, “Mr. Dixon said he already fired the chump that messed up the brakes.”

Dixon's family was one of extreme prestige in the neighborhood. He sold everyone on the block his own company's cars at half price. We ourselves had bought two cars from him complete with insurance and warranties. At the mention of his cars bits of pieces of memories drifted back to me. Memories from bottomless holes of my mind that I had tried to submerge were suddenly replayed like a movie. Sun poured in through the window and my dad, an endless grin across his face turned around kissed my brother and me on the forehead before returning his attention to the road. Mom was laughing and reading the newspaper to all of us.

“Shut up!” I did not want to hear or remember any more. “Dad was the one driving. He should be dead too!” I spun around with my hands holding my head. “Wha do you want fr-fr-from me?”

Logan replied with tears in his eyes, “It’s only been a month.”

I looked at him again, “You are lucky you aren’t living with him. He has destroyed everything. I haven’t eaten anything in ages and…”

“Dixon’s taking us away today; we are moving away.”

He shook his head. “He’s getting lawyers and everybody to cover his tracks. There won’t be any evidence to use in court.”

My brain began to spin and I felt numb trying to process this. I leaned on a tree, weak with hunger and confused about what I should be doing now.

Logan unbuttoned his tuxedo and handed it over to me.

I didn’t have a clue what he was doing. “What are you doing” I asked.

He looked down at the ground and muttered, “I want to say good bye to him and I can’t go anywhere near him as a Dixon.” Tears were forming under his eyes.

I stared at him intensely wondering if he was serious, but taking off my clothes nonetheless. The tuxedo was loose around my chest and Logan struggled to get his old sweater on.  “You know he is not the same man he was before", I ventured.  I can barely get near him without getting beat” I gave a nervous chuckle. “Then again, he always thought you were the better twin.”

Logan just looked at me, emotionless.

Seeing his clean face over his old clothes and touching the fabric of the tuxedo, I got very mad. “Why did the Dixons choose to adopt you? Why am I stuck in this world without mom; trying my hardest every day to survive? Why do you have the easy life, huh?”

“I don’t know. They promised to reduce the burden on dad and I guess they just chose me to…”

I punched my brother in the face with all the strength I could muster. All the hate, grief, pain, and most importantly, the pent-up sadness that I had experienced in the past month were propelled my fist forward. He didn’t block it. He didn’t even try to dodge. He just stood there while I pummeled away at him, waterfalls in both our eyes. Then my world changed.

“Hey, don’t kill him for us” whispered a gruff man behind me, and I felt myself being pulled away. “The mayor gotta lot planned out for Mr.George there.”

Another man came around Logan and dropped a large black bag over him. “I got him!” he hollered and the gruff man ran over and tied up the bag.

“George-cellphone-in my pocket.” I heard from the bag. Sure enough, I found a phone in the pocket of his shirt. I whipped it out as the captors started running away with Logan.

“Who are you guys?” I screamed. I ran forward at Logan’s captors. They just chuckled as one of them delivered a kick to my stomach that sent me flying backwards. The force felt like a catapult that had snagged me during Its release and had sent me onto the ground back first. My head met a tree root like a cymbal meets its pair.

I had no idea what to do. The only thing in my head was the sound of two grown men running away. Dirt and tree twigs stuck on my face and I could taste the rough bitterness of the ground. I lifted my head up and, as I watched the kidnappers take Logan away, I made up my mind. I could not let that happen to me. It was too dangerous to be my father's son. I had to do something. I had made my mind before they even left my sight. I dropped the phone and screamed, “Goodbye, Logan!” I sniffled and cried, tears streaming off my face. “I love you!” With my final breath, I bellowed out the worst thing I have ever said to my brother. “Say hi to mom for me.” I got up, no longer trying to regulate my breath for anything. I cried. It was very painful. I had lost everything. My family was gone. I trudged in the direction of the Dixon mansion. “I need food, and I need to survive for them” was what I kept telling myself in order to keep walking. “It’s not your fault. There is nothing you could have done. Mom would want you to live on.”

This was not what I wanted. This was nowhere close to the person I wanted to be. Nothing went the way it should have. The only thing I could do now was go to the Dixon mansion where they were calling my name. "Logan! Logan! Where are you?"