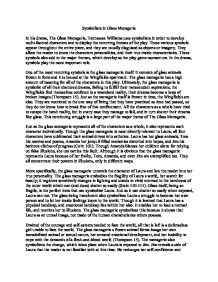 Symbolism in Glass Menagerie In his drama, The Glass Menagerie, Tennessee Williams uses symbolism in order to develop multi-faceted characters and to display the recurring themes of the play. These various symbols appear throughout the entire piece, and they are usually disguised as objects or imagery. They allow the reader to know the characters personalities, and their true inside characteristics. These symbols also add to the major themes, which develop as the play gains momentum. In the drama, symbols play the most important role. One of the most recurring symbols is the glass menagerie itself. It consists of glass animals frozen in form and it is housed at the Wingfields apartment. The glass menagerie has a high amount of meaning for all of the characters in this play. Ultimately, the glass menagerie is symbolic of all their shattered dreams, failing to fulfill their transcendent aspirations, the Wingfields find themselves confined to a wasteland reality, their dreams become a heap of broken images (Thompson 15). Just as the menagerie itself is frozen in time, the Wingfields are also. They are restricted to the one way of living that they have practiced as time had passed, so they do not know how to break free of that confinement. All the characters as a whole have tried to escape the harsh reality, but in every case they manage to fail, and in turn shatter their dreams like glass. ...read more.

Originally, Laura is delicate and unique, as is the unicorn. She is different because of her disability, but internally, she is a girl who missed a couple steps while growing up. When the unicorn loses its horn and becomes like the rest of the animals in the glass menagerie, it loses its uniqueness. Likewise, when Laura gains confidence through Jim, she realizes that she is not too different from everyone else. This is a characteristic that is able to be overcome, but just needs some assistance (Ross 1). Jim brings out Laura s inside, but then destroys it when the truth is revealed. When this incompatible couple waltzes into the glass menagerie, they begin to destroy it. At first, Laura does not mind. She is too thrilled with the prospect of being normal to care whether her glass unicorn has lost its distinctive horn. But the accident warns the reader of what Jim awkwardly confesses after the kiss that he has made a mistake and will see her no more. Laura now knows that she belongs to a different world from Jim. He wandered into a zoo of exotic animals, but that was on his day off and he must return to the real world (Scanlan 102). This quote depicts the situation perfectly. When Jim switches worlds as he steps into the Wingfield s apartment, he represents a member of the glass animals. ...read more.

Amanda uses it as an escape; it is the only way a gentlemen caller can come and rescue Laura. For Laura, it is an escape from the world. She is proven weak when she has to leave the apartment and stumbles. Tom uses it as an escape to the outside and from his mother (Mendez 1). For Jim, it is a way of entering the Wingfields lives (Harris 1). As Laura is symbolized by her glass unicorn, Tom is symbolized by his movies, Cohn states. He explains movies to his mother as sublimated adventure, but by the time Jim comes to the house, Tom is tired of vicarious adventure (Cohn 100-101). Tom uses movies as a get-a-way from his unhappy life in the apartment. He goes to the movies instead of moving, but as he explains, he wants to move. Tom escapes to the movies, but then finds that he wants adventure of his own, in real life. In conclusion, these symbols which appear throughout the entire drama show the true personalities of Tennessee Williams characters. Each character has separate traits, which are revealed by these images. The theme of the drama is the destruction and failure of hopes and dreams. Each of these symbols helps display this thesis individually, but they all add together to prove it as a whole. All of the developing characters in The Glass Menagerie together produce a central theme, which is reliant on symbols. ...read more.