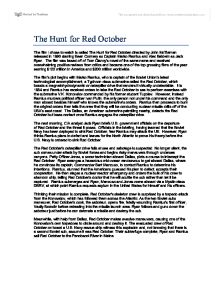 The Hunt For Red October

The Hunt for Red October The film I chose to watch is called The Hunt for Red October directed by John McTiernan released in 1990 starring Sean Connery as Captain Marko Ramius and Alec Baldwin as Jack Ryan. The film was based off of Tom Clancy's novel of the same name and received overwhelming positive reviews from critics and became one of the top grossing films of the year earning $122 million in America and $200 million worldwide. The film's plot begins with Marko Ramius, who is captain of the Soviet Union's latest technological accomplishment, a Typhoon class submarine called the Red October, which boasts a magnetohydrodynamic or caterpillar drive that renders it virtually undetectable. It is 1984 and Ramius has received orders to take the Red October to sea to perform exercises with the submarine V.K. ...read more.

No longer silent, the sub comes under attack by Soviet forces and begins risky maneuvers through undersea canyons. Petty Officer Jones, a sonar technician aboard Dallas, plots a course to intercept the Red October. Ryan arranges a hazardous mid-ocean rendezvous to get aboard Dallas, where he convinces its captain, Commander Bart Mancuso, to contact Ramius to determine his intentions. Ramius, stunned that the Americans guessed his plan to defect, accepts their cooperation. He then stages a nuclear reactor emergency and orders the bulk of his crew to abandon ship, telling Red October's doctor that he will scuttle the sub rather than let it be captured. Ramius submerges and Ryan, Mancuso and Jones come aboard via a Mystic-class DSRV, at which point Ramius requests asylum in the United States for himself and his officers. Thinking their mission is complete, Red October's skeleton crew is surprised by a torpedo attack from the Konovalov, which has followed them across the Atlantic. ...read more.

This is supported by the fact that by the time Brezhnev died in 1982, the political and economic policies of the Soviet Union were in crisis. Gorbachev failed to improve the economical situation which, along with numerous revolutions and deposing of Communist governments in Czechoslovakia, Romania and Hungary, possibly could've inspired citizens of the USSR to seek out places with greater economic stability and prosperity such as the US. I think that the film does have some historical significance in regards to the defection of Soviet operatives and their requests for asylum in the United States portrayed in the film. It shows how that despite outward appearances of technological superiority such as Sputnik and Yuri Gagarin in the past, the Soviet Union is currently under large amounts of stress from its political instability and obsolete economical structure which would most likely result in poor quality of life for its people leading to defection and immigration to the USA, which, due to immense economic growth through capitalism, has become an ideal place to live in. ...read more.