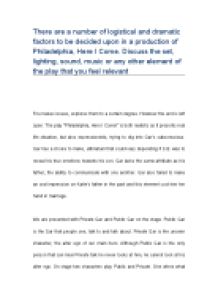 There are a number of logistical and dramatic factors to be decided upon in a production of Philadelphia, Here I Come. Discuss the set, lighting, sound, music or any other element of the play that you feel relevant.

﻿There are a number of logistical and dramatic factors to be decided upon in a production of Philadelphia, Here I Come. Discuss the set, lighting, sound, music or any other element of the play that you feel relevant ________________ Friel raises issues, explores them to a certain degree. However the end is left open. The play ?Philadelphia, Here I Come!? is both realistic as it presents real life situation, but also expressionistic, trying to dig into Gar?s subconscious. Gar has a choice to make, ultimatum that could vary depending if S.B. was to reveal his true emotions towards his son. Gar lacks the same attribute as his father; the ability to communicate with one another. Gar also failed to make an oral impression on Katie?s father in the past and this element cost him her hand in marriage. We are presented with Private Gar and Public Gar on the stage. Public Gar is the Gar that people see, talk to and talk about. Private Gar is the unseen character, the alter ego of our main hero. ...read more.

The piece of music seems to suggest anxiety, change, and excitement ? all emotions that Gar is feeling at that particular moment. This way Brial Friel attempts to dig into Gar?s subconscious. There is a nearly institutional quality to the shades of green, and the dim overhead lighting focuses attention in the central spaces over the kitchen table and Gar?s bed in the two rooms of the split set. Almost everything happens round the kitchen table, Gar?s friends drink and talk, S.B. plays a game with Cannon, Gar talk to S.B. about irrelevant stuff. The entire play happens within twenty-four hours and we are reminded of it throughout by the highlighted clock in the kitchen and clamorous sounds of the clock ticking in between the events. This way, Friel wants to point out the inner conflict of our main hero of the play, his time is running out and eventually, it will be for him to decide whether he leaves for Philadelphia or stays in Ballybeg. This is a play about finding one?s place in the world wherever that might be. ...read more.

Friel decided to keep the ending opened it?s for us to figure out whether he has any reason to leave or perhaps stay. In conclusion, Friel uses many stage directions to connect the audience with the characters. He presents us with Private Gar, alter ego that raises many concerns about his inner feelings, which we wouldn?t know about if Friel was to use just Public Gar. Flashback is presented to show previous events from the past in order to get deeper understanding of Gar. Music is outlined in the play to show Gar?s current emotions and their change for example we can tell his mood changes as he decides to play a much faster song. The entire play happens within twenty-four and we are reminded of it by the highlighted clock in the kitchen and clamorous sounds of it in between the scenes. Issue of the lack of communication between Gar and S.B. never gets resolved; we can tell that both of the characters suffer, as they?d like to express themselves. In the end with an open ending and not much gets resolved. It?s up to the reader to put the events in order and make personal judgement on the possible outcomes that may have resulted in the play. ...read more.