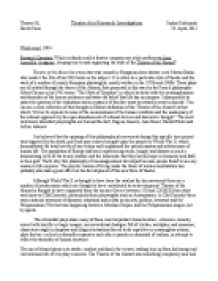 Which methods could a theatre company use when performing Jean Anouilh's &quot;Antigone&quot;, keeping true to and supporting the style of the &quot;Theatre of the Absurd&quot;?

﻿Theatre HL Theatre Arts Research Investigation Sophie Karbjinski David Vaux 23. April, 2012 Word count: 1004 Research Question: Which methods could a theatre company use while performing Jean Anouilh's 'Antigone', keeping true to and supporting the style of the Theatre of the Absurd? Theatre of the Absurd is a term that was coined by Hungarian-born theatre critic Martin Esslin, who made it the title of his 1962 book on the subject. It is refers to a particular style of theatre and the work of a number of mainly European playwrights, mostly written in the 1950s and 1960s. These plays are all related through the theme of the Absurd, first presented in this way by the French philosopher Albert Camus in his 1942 essay, ?The Myth of Sisyphus? in which he deals with the meaninglessness and absurdity of the human existence and states the belief that life has no purpose. Subsequently he poses the question if the realization and acceptance of this fact must necessarily result in suicide. ...read more.

The Absurdist plays share many of these most important characteristics: extensive comedy, mixed with horrific or tragic images; unconventional dialogue full of clichés, wordplay, and nonsense; characters caught in hopeless and illogical situations forced to do repetitive or meaningless actions; plots that are cyclical or absurdly expansive and either a parody or dismissal of realism, in attempt to reflect the absurdity of human existence. The aim of absurd plays is to startle, confuse and shock the viewer, waking him up from his boring and conventional life of everyday concerns. The Theatre of the Absurd was something completely new and rebellious to the viewers and was indeed, like some of the playwrights liked to call it, ' anti-theatre'. It was surreal, illogical, conflictless and plotless. The dialogue was total baloney and seemingly without meaning. Unsurprisingly, it was first received with disapproval and lack of understanding. Jean Anouilh's play 'Antigone', originally produced in Paris in 1942, is a tragedy inspired by and adapted from the ancient greek classic 'Antigone' by Sophocles which was first performed in Athens in the 5th century B.C. ...read more.

Especially aspects from the play that already seem slightly absurd should be promoted, such as Queen Eurydice knitting until she goes to her room and dies or the three guards that play cards, completely oblivious to the tragedy enrolling before them. On that point, the director would have to decide if he wants to stay true to Anouilh's original text or if he wants to change the dialogues, in which case one could take the meaning out of conversations or insert nonsensical sentences, make the characters talk past each other, without completely losing the plot. The stage setting could be either overly surrealistic, further contributing to the audiences confusion or completely simplistic going as far as not having a setting at all, further emphasizing the anti-theatrical aspects and adding to the alienation of the viewer. Sources: Carlson, Marvin. 1993. Theories of the Theatre: A Historical and Critical Survey from the Greeks to the Present. Expanded ed. Ithaca and London: Cornell University Press Ince, Walter. 1968. Forum for Modern Language Studies: 'Prologue and Chorus in Anouilh's Antigone' IV, pp. 277 ? 84 Freeman, Ted. 2000. Antigone: Commentary, Anouilh's Antigone. Methuen Drama Student Edition, London, Methuen Publishing ...read more.