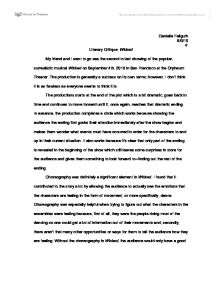 Danielle Fellguth 9/6/10 4� Literary Critique: Wicked My friend and I went to go see the second to last showing of the popular, surrealistic musical Wicked on September 4th, 2010 in San Francisco at the Orpheum Theater. The production is generally a success on its own terms; however, I don't think it is as flawless as everyone seems to think it is. The productions starts at the end of the plot which is a bit dramatic, goes back in time and continues to move forward until it, once again, reaches that dramatic ending. In essence, the production completes a circle which works because showing the audience the ending first grabs their attention immediately after the show begins and makes them wonder what events must have occurred in order for the characters to end up in their current situation. It also works because it's clear that only part of the ending is revealed in the beginning of the show which still leaves some surprises in store for the audience and gives them something to look forward to--finding out the rest of the ending. ...read more.

An example of this would be in "Dancing Through Life" when I kept getting mesmerized by the books the ensemble were moving around instead of appreciating the whole scene. Something that contributes to the production even more than the choreography are the songs that are sung throughout the musical. Through the songs, the audience is given a more detailed description of the characters and the characters' situations and emotions in a different way other than lines, captivating the audience one again and giving them the opportunity to relate to the characters. This is one aspect of the musical that works really well because it is a way for the show to hold the audiences' attention and relay information to them. Having music especially works when the show was trying tell the audience something and get them to feel a certain way at the same time. However, much like the choreography aspect of the show, there were times when having music didn't work. Some of the messages that the songs gave were powerful, but they might've been stronger if the director had chosen to have the message of the song spoken instead of sung. ...read more.

This allowed them to really get both sides of the story, to be cliche, instead of just seeing the characters' world from one person's point of view. The way the director chose to introduce the theme of good triumphing over evil also works. At the beginning of the production it's clear that being "good" does have some advantages over being "evil"; however, as the musical progresses it becomes even more clear that good triumphing over evil may not always be what it seems to be. Portraying such a strong message in this manner works because, at first, it shows the audience what they already know and what they feel comfortable and then slowly it introduces them to a new idea making it less likely that they will reject the idea being proposed to them. Wicked has certain aspects that work together to make it a success, such as it's choreography, props, soundtrack, themes, and costumes. Although, not every one of those aspects has a completely positive impact on the musical which makes it hard for me to refer to Wicked as a complete and total success. ...read more.