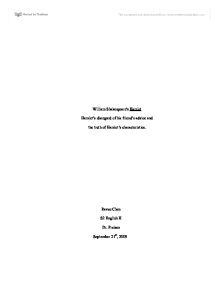 William Shakespeare's Hamlet Hamlets disregard of his friends advice and the truth of Hamlets characteristics.

Hamlet’s disregard of his friend’s advice and

the truth of Hamlet’s characteristics.

Hamlet, the late king of Denmark, has risen again in Shakespeare’s play Hamlet. He appears in the first scene of the play to Horatio, Bernardo and Marcellus. Being very scared and confused, they decide to tell the Prince of Denmark, Hamlet, about this strange occurrence. They thought that the spirit, being an apparition of high rank and a relative to Hamlet, would speak to him though it would not speak to them. Hamlet, upon hearing their story, decides to go see the ghost with his own eyes.  When the ghost reappears the following night, Hamlet goes to speak with it and it motions for him to come with it alone. Hamlet’s friends, Horatio and Marcellus, do not trust the ghost; they believe the ghost might be a demon in disguise, or have ill intentions. However, the way in which Hamlet responds to the ghost by going with it demonstrates his courage and sense of independence.

Horatio and Marcellus try to stop Hamlet from following his father’s ghost which could actually be the devil in disguise. During the Elizabethan period, people believed that whenever a ghost appeared it could either be a soul that returned from the dead because of unfinished business or one of Satan’s minions in disguise. Even Hamlet believes this: Be thou a spirit of health or goblin damn’d? (I.iv.40). Horatio attempts to persuade Hamlet to refuse go with the ghost because ghosts were seen as symbols of a catastrophe about to happen.

There is no evidence that what the ghost has to say will result in anything good. Horatio tries to convince Hamlet that the ghost is dangerous by listing the possibilities that could happen. If the ghost was the devil in disguise it might try and tempt Hamlet into jumping into the ocean “Or to the dreadful summit of the cliff That beetles o’er his base into the sea” (I,iv.71-72)  After the apparition is alone with Hamlet, it may change into another form; “Which might deprive [his] sovereignty of reason” (I, iv.73) He then goes on to say that just talking to the ghost will give him desperate thoughts and strip him of his sanity.

When Hamlet first hears about the ghost, he pretends that he doesn’t believe it. However, after everyone exits, he starts revealing what was actually going on in his mind. This tells that he has a strong sense of independence and would not even trust his friends with the truth of some things. He knows that the reappearance of his father means that there is something wrong happening in Denmark: “all is not well; I doubt some foul play” (I,ii.253-254) Knowing this, he still decides to follow the ghost despite his friends rebuking his decision. In this scene, Hamlet’s courage stands out because he listens to the ghost even thought he was prettified by fear to the extent where he would goes so far as to ask for Heaven’s protection from the apparition of his father: “angels and ministers of grace defend us!” (I,iv.40). Another characteristic of Hamlet that we learn about is his sense of duty and belief in faith. He has such a strong belief in fate that he pursues the ghost even though it frightens him so much that his blood freezes: “My fate cries out, And makes each petty artery in this body As hardy as the Nemean lion’s nerve.”(1,iv.82-84) Another example is, in the early lines of his conversation with the ghost he says, "Speak, I am bound to hear."(I,v.7) He feels a kind of obligation to listen to what the ghost has to say and when he learns about the truth behind his father's death he put his father's duty as the single most important thing in his life: "And thy commandment all alone shall live".(I,v.103)

From the beginning of the very first act of the play, the mystery of the ghost has propelled the plot line of the story forward. Horatio and Marcellus do not trust the ghost because of beliefs during their time and the mystery that encompasses this ghost. Hamlet ignores all the possible dangers and follows what he believes to be his fate; however, his courage and independence will be tested as the play progresses on.