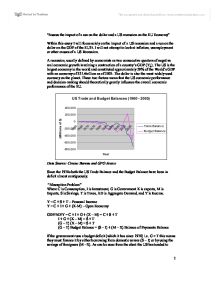 "Assess the impact of a run on the dollar and a US recession on the EU Economy" Within this essay I will focus solely on the impact of a US recession and a run on the dollar on the GDP of the EU15. I will not attempt to look at inflation, unemployment or other causes of a US Recession. A recession, usually defined by economists as two consecutive quarters of negative real economic growth involving a contraction of a country's GDP (Yv). The US is the largest economy in the world and constituted approximately 29% of the World's GDP with an economy of $11.6trillion as of 2003. The dollar is also the most widely used currency on the planet. These two factors mean that the US economic performance and decision-making should theoretically greatly influence the overall economic performance of the EU. Data Source: Census Bureau and GPO Access Since the 1970s both the US Trade Balance and the Budget Balance have been in deficit almost contiguously. "Absorption Problem" Where C is Consumption, I is Investment, G is Government X is exports, M is Imports, S is Savings, T is Taxes, AD is Aggregate Demand, and Y is Income. ...read more.

X� = S + T� + Mv A run on the dollar would occur from the central banks selling dollars in large amounts because of the lessening return offered to them by the declining interest rate and confidence in the $. Hence Mv and US goods becoming more price competitive abroad X�. As more income flowed into the country there would be more tax receipts lessening the budget deficit. The increase in the Price Competitiveness and exports of American goods can be seen in the Real Effective Exchange Rate. For example: Car Retails for �10,000 and $20,000 with an Exchange Rate of �1:$1.50 REER = (1.5* 10000)/20000 = UK Good Costs $15000/US Good Costs $20000 Dollar depreciates against the Pound to an Exchange Rate of �1: $2.50 REER = (2.5 * 10000)/20000 = UK Good Costs $25000/US Good Costs $20000 As can be seen a decline in the REER has increased the Price Competitiveness of the US good as compared to the British Good. It then follows that the US will export more cars to Britain (X�) and import less cars from Britain (Mv) ...read more.

- FT 05/12/06 The graph does correlate strongly in 1992 and 2001 however this could have been caused by both countries receiving the same exogenous shock. Domestic consumption has usually been far more important to EU growth prospects than its Balance of Payments with the US. Joaquin Almunia, the European Union's monetary affairs commissioner, said last month: "So far our estimate for the net impact of the US slowdown on the European economy is not very important because our growth is mainly based on internal demand."- FT 05/12/06 Conclusion It is hard to derive what would happen to the EU economy if the US $ were to fall and the US were to suffer a recession. Many factors affect EU growth which I have not researched (e.g. Depreciation of the $ causing $-denominated Oil prices to rise). It is usually assumed that if the US economy is faltering and its currency falling this would have a knock on bad effect for the EU economy. However I feel the effect is marginal as even though the EU may export less to the US because of this its exporters would instead look elsewhere for new markets as world GDP and demand has been steadily increasing for many years. ?? ?? ?? ?? 1 ...read more.