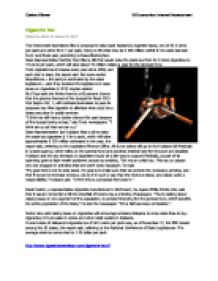 Alabama's Cigarette Tax Article. The basic economic problem in this article is negative externalities. An externality occurs when there is a divergence between social and private costs and benefits.

Cigarette Tax Posted by admin on January 6, 2012 Two Democratic lawmakers filed a proposal to raise state Alabama's cigarette taxes, one of 32.5 cents per pack and other for $ 1 per pack, trying to fill what may be $ 400 million deficit in the state General Fund next fiscal year, according to News Birmingham. State Representative Patricia Todd filed a bill that would raise the state tax from 42.5 cents cigarettes to 75 cents per pack, which will raise about 75 million dollars a year for the General Fund. Todd cigarette tax increases every year since 2008, and each plan is dead, the report said. But some senior Republicans - the party is dominated by the state legislature - said they doubted the legislature to raise taxes on cigarettes in 2012 regular session. But Todd said she thinks there is a 60 percent chance that the gloomy forecast of the budget for fiscal 2013 that begins Oct. 1, will motivate lawmakers to pass its proposed tax hike cigarette to alleviate what could be a sharp reduction in public services. ...read more.

Current state of Alabama's cigarette tax of 42.5 cents per pack was, as of November 17, the fifth lowest among the 50 states, the report said, referring to the National Conference of State Legislatures. The average state tax amounted to 1.29 dollar per pack. http://www.cigarettesreviews.com/cigarette-tax-2 The basic economic problem in this article is negative externalities. An externality occurs when there is a divergence between social and private costs and benefits. Cigarettes and secondary smoking are considered to be negative externalities of consumption. In this case the marginal social benefit (MSB) is less than the marginal private benefit (MPB). This is shown in the diagram below. Because of a free market, the consumers will maximize their maximum personal benefit (when MPC=MPB), and consume at the level where MSC (marginal social cost) =MPB. This will create over-consumption of cigarettes at Q1 at a price P1. The socially efficient output is at Q and so the free market overproduces from Q to Q1. This causes welfare loss to society and a market failure. The government will attempt to do two things to reduce or eliminate the negative externality and the market failure. ...read more.

Therefore, quantity demanded doesn't fall to the socially efficient level. Also, if taxes are raised too much, then people start looking for other sources of supply or perhaps substitutes for cigarettes such as cheaper cigarettes off the internet. A cause of this may be the emergence of a black market; this contradicts the Editorial Board's statement "we are strong advocates of raising cigarette tax - and the higher the better". Taxation seems to be the better choice, provided that the revenue gained exceeds the social costs. The tax revenue can be used to subsidize health-care costs to ease the burden of the taxpayer. It can also be used to educate and advertise against smoking, as well as initiating programs to help smokers stop. Hopefully this will in the long run reduce the demand for cigarettes and so shift MPB to the left closer to MSB, thus reducing the health-care costs. However, it would increase the costs to smokers and producers in the tobacco industry. In the short run, this may lead to unemployment; while in the long run unemployment might fall since the indirect costs, such as lost wages due to smoking related illnesses, will fall. ?? ?? ?? ?? Carina K�rner IB Economics Internal Assessment ...read more.