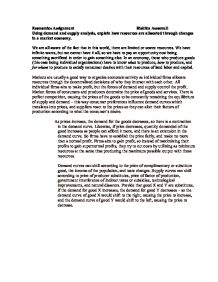 Economics Assignment Rishika Assomull Using demand and supply analysis, explain how resources are allocated through changes in a market economy. We are all aware of the fact that in this world, there are limited or scarce resources. We have infinite wants, but we cannot have it all, so we have to pay an opportunity cost being something sacrificed in order to gain something else. In an economy, those who produce goods (this case being individual organizations) have to know what to produce, how to produce, and for whom to produce to satisfy consumer desires with their resources of land labor and capital. Markets are usually a good way to organize economic activity as individual firms allocate resources through the decentralized decisions of who they interact with each other. All individual firms aim to make profit, but the forces of demand and supply control the profit. Market forces of consumers and producers determine the price of goods and services. There is perfect competition, causing the prices of the goods to be constantly remaining the equilibrium of supply and demand - this way consumer preferences influence demand curves which translates into prices, and suppliers react to the prices so they can alter their factors of production according to what the consumer's desire. As prices increase, the demand for the goods decreases, so there is a contraction in the demand curve. Likewise, if price decreases, quantity demanded of the good increases as people can afford it more, and there is an extension in the demand curve. ...read more.

The labor used on the infertile north field is measured on the horizontal axis and the total output from both fields in shown on the vertical axis. (We are assuming, of course, that all labor not used on the North field is used on the South field). The dark green curve shows how total output changes as we shift labor from the north field to the south field. Thus, the top of the curve is the interesting spot -- that's where we get the most output. In this example, that's the efficient allocation of resources between the two fields. Figure 4: Maximum Production It's easy to see that we should put some labor to work on the north field -- but not too much. The vertical orange line shows that the maximum output -- the top of the dark green curve -- comes when about 300 labor days are allocated to the north field and the rest, 700 labor days, to the south field. And that's exactly right. It's pretty easy to see where the maximum is in this simple example. But in a more realistic example, in which there could be many more than just two dimensions, it's harder to visualize. We need a rule that we can apply in more complex, realistic examples, a rule that will tell us if we have or don't have an efficient allocation of resources. That's where the economist's "marginal approach" comes in. The objective is to get to the top of the hill. You could call "the marginal approach" the "bug's-eye view." Think of yourself as a bug climbing up that production hill in the picture. How will you know when you are at the top? william-king.www.drexel.edu/top/prin/txt/MPCh/MPex0.html ...read more.