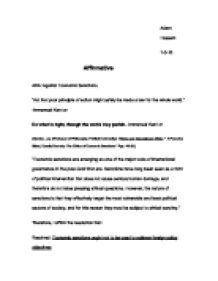 An analysis of Why Economic Sanctions are bad. Quotes and argument.

Adam Hussain 1-3-10 Affirmative AKA: Against Economic Sanctions "Act that your principle of action might safely be made a law for the whole world." -Immanuel Kent or Do what is right, though the world may perish. -Immanuel Kent or (Gordon, Joy. (Professor of Philosophy, Fairfield University). "Ethics and International Affairs." A Peaceful, Silent, Deadly Remedy: The Ethics of Economic Sanctions." Pgs. 48-52.) "Economic sanctions are emerging as one of the major tools of international governance in the post-Cold War era. Sanctions have long been seen as a form of political intervention that does not cause serious human damage, and therefore do not raise pressing ethical questions. However, the nature of sanctions is that they effectively target the most vulnerable and least political sectors of society, and for this reason they must be subject to ethical scrutiny." Therefore, I affirm the resolution that: Resolved: Economic sanctions ought not to be used to achieve foreign policy objectives Definitions: Economic Sanctions- Economic penalties, such as stoppage of trade and financial transactions, imposed upon a country to force compliance with another country's or UN's or WTO's demands. (businessdictionary.com) Ought- used to express obligation. ...read more.

This reduces one's own residents' ability to choose for them with whom they wish to trade. The result is extensive direct costs to trade as residents are forced to cancel contracts or are forbidden to enter into new ones. So basically, the use of economic sanctions harms the economic interests of the nation imposing them without a significant benefit to the nation imposing them. Furthermore, the imposition of sanctions strains ties between the sanction-imposing nations and its allies that do not support the sanction. A. Sanctions have cost American exporters $15 billion to $19 billion in lost annual sales overseas and caused long-term damage to U.S. companies--lost market share and reputations abroad as unreliable suppliers. B. In...Washington, sanctions have a direct cost for local businesses and their employees. In Washington, wheat and peas grown for export to Iran and Cuba cannot be sold, nor can Boeing sell its planes to other countries because the direct or indirect results of sanctions. This affects many people negatively due to the imposition of sanctions. C. the US sanctions on Cuba have been condemned yearly since 1992 by the United Nations general assembly as a violation of international law. ...read more.